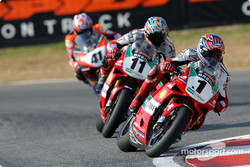 "It was just unbelievable to get the win and get a new record at the same time," stated Bayliss. "It's been another incredible weekend for me here."

Bayliss overcame the early challenge by Noriyuki Haga on a Aprilia. Haga also set a record today by turning a time of 1:42.178 for a new track record.

Earlier in race one, Bayliss won for five-in-a-row; a race he almost lost on the last lap. Bayliss now leads Colin Edwards by 45 points in the standings.

Bayliss loved riding as a young Aussie lad and turned to motorcycles in 1992. In 1994, he won the Australian National 600 race at Bathurst and finished sixth in the championship [the next year, he finished 2nd]. Bayliss entered the Australian Superbike Championship in 1996 and went on to finish in a remarkable third in his debut year. His accomplishments in his home country brought him to the attention of a premier British Superbike Championship team.

Team GSE welcomed Bayliss aboard in 1998. By 1999, Bayliss and his Team GSE Ducati qualified on pole six times, won six races and won the prestigious British Superbike Championship by 28 points. Bayliss had emerged as one of the top riders in the world. 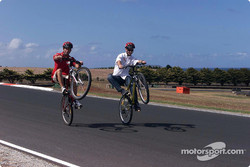 2000 saw Bayliss' arrival in the United States to compete in the AMA Superbike Championship for Vance & Hines. He wasted no time showing his riding style by winning the pole at his first race, the Daytona 200. His time in America was short-lived when he received a call to return to Australia.

The 1999 World Superbike Champion, Carl Fogarty crashed at the Phillip Island event. Ducati called Bayliss up to replace the injured Fogarty. Ironically, Fogarty presented Bayliss with his British crown. His first win on the world scene was at Hockenheim, Germany in 2000.

Since then, Bayless has set records, won pole positions and races, been atop the podium and in 2001 became the World Superbike Champion. Ducati won their 10th manufacturers title and their 100th pole position. Bayliss was the ninth rider to win the championship on a Ducati.

Marquez slammed for “lack of respect” towards rivals