A real hit before the WTCC season opening: The German Team ALL-INKL.COM Muennich Motorsport contracts world champion Rob Huff – René Münnich: “We want to be at front right from the beginning.“

Friedersdorf (rol/ot) - A real hit just one month before the season opening of the WTCC: The German Team ALL-INKL.COM Muennich Motorsport from Friedersdorf contracts the title holder Rob Huff as driver. The 33 year old British got the title of the FIA World Touring Car Championship (WTCC) for the first time in 2012 in his Chevrolet. He will replace Markus Winkelhock (Berglen-Steinach), who chose a different way for the coming season, behind the wheel of one out of three Seat Leon of the racing stable from Saxony. Huff will fight alongside of team principal and racing stable owner René Münnich (Friedersdorf) and team manager Marc Basseng (Neusalza-Spremberg).

We are very happy it worked out and to have Rob on track for our team now.

Two driver world champions with Basseng (GT1) and Huff (WTCC) as well as the last team world champion of the GT1, ALL-INKL.COM Muennich Motorsport – this combination is important to be a favourite for the racing stable from Saxony at the new season and will surely cause quite a headache for the combatants. And René Münnich doesn’t keep his goals for himself: “We want to be at the front of the field right from the beginning and fight about podium placings and we will aim on wins. At the end of the season the goal has to be a podium placing in the overall rankings.“

The team starched his rows with the WTCC champion Rob Huff. “After the retreat of Chevrolet from the WTCC we saw the chance and we thought about all possibilities to get the ambitious and acting world champion in our team. We are very happy it worked out and to have Rob on track for our team now,” René Münnich explained. "He certainly can help us a lot with his experience and his abilities to finish as best as we can at our premiere season of the WTCC – and as I already said, to be on the podium." 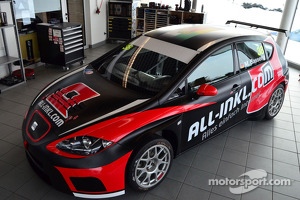 The Seat Leon of Marc Basseng

Rob Huff, who was behind the wheel for Chevrolet right from the beginning of the WTCC in 2005, is happy to be on start of the Touring Car world championships in 2013 as well. By the way, the British – who started with motor sports in 1992 with Kart racing – had his debut as a professional race driver in 2004 in a Seat at the British Touring Car Championships. “I am very happy to be on start at the WTCC for the Team ALL-INKL.COM Muennich Motorsport. The racing stable proved its professionalism last year as the GT1 world champion in the drivers and the team rankings." And now he wants to participate to get the team up front at the World Touring Car Championship as well.

The racing stable from Saxony already had four days of testing with the new Seat Leon at the beginning of February in Spain and Portugal with René Münnich and Marc Basseng. “We had to handle all possible weather facets, which led us gather a lot of experience,” the team manager Marc Basseng explained. The last test drives are scheduled for Wednesday and Thursday (27th/28th of February) for ALL-INKL.COM Muennich Motorsport in Monza (Italy), where the new season of the WTCC will start on the 23rd/24th of March.

Monteiro continues preparations of the Honda Civic and new season

Munnich to run electric cars in World Rallycross next year