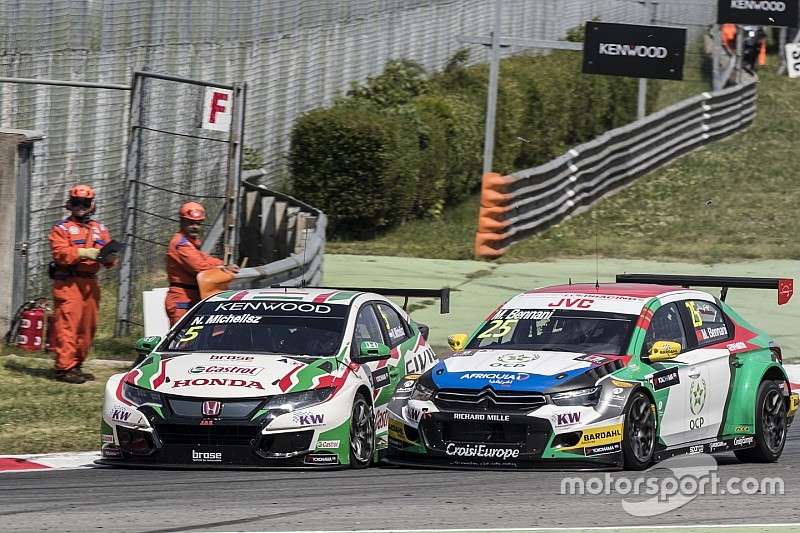 Mehdi Bennani and Thed Bjork have been punished by the stewards for incidents in the opening WTCC race at Monza.

SLR Citroen's Bennani and Honda's Norbert Michelisz came together at the end of the third lap at the Parabolica whilst fighting for the lead.

Michelisz made a move down the inside of Bennani, and the two locked wheels as the Moroccan turned into the corner, both sustaining terminal suspension damage.

“I didn’t expect him to fight at Parabolica, as it’s very tricky,” said Bennani.

“When I started to brake at the same point as I had before, and I felt a big crash and the race was over. At the end we are both losers, as we’ve lost a lot of points and given them to the others.”

Michelisz was unhappy about the damage to both his car and his championship position after the incident, as he leaves the race weekend 39 points behind teammate Tiago Monteiro.

“He should either defend before the corner, or if he leaves the door open, he shouldn’t turn into the corner as if I wasn’t there,” said Michelisz.

“I can accept that he didn’t see me, but it doesn’t help me get the points back. I think everyone understood that the decision was because Mehdi turned into the corner like I wasn’t there.”

The stewards investigated the incident and have handed Bennani a five-place grid penalty for the next race at the Hungaroring.

Bjork meanwhile was given a one-second penalty for his pass on Esteban Guerrieri's Campos Chevrolet in Race 1.

The penalty drops Bjork behind Guerrieri to fifth, and so he drops back two more points to Monteiro in the championship standings, with the Portuguese driver now 15 points ahead.