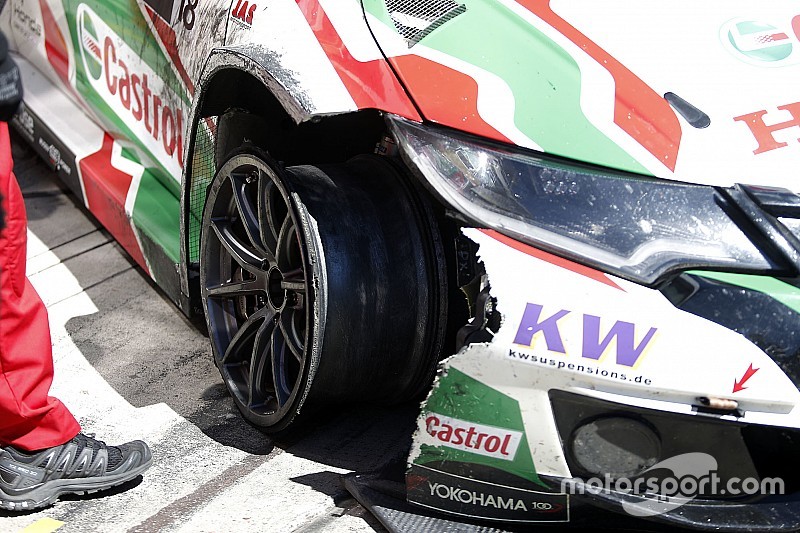 Four-time WTCC champion Yvan Muller believes teams should shoulder the blame for the spate of punctures in last weekend’s Nurburgring round, as blaming supplier Yokohama is “too easy”.

Both races on the Nordschleife were affected by tyre problems, with Volvo driver Nestor Girolami losing a second-place finish in the opener to a puncture and erstwhile points leader Tiago Monteiro failing to score points all weekend following his failure in the same race.

The Honda driver was particularly critical of Yokohama, who he accused of creating a “dangerous” situation, while Munnich Citroen’s Rob Huff also called the situation “unacceptable”.

But Muller, who was caught up in a crash in last year’s Nurburgring event when Monteiro suffered a puncture while leading, believes the fact some teams avoided failures shows that Yokohama cannot be entirely to blame.

"When this kind of incident happens, the first thing you do is blame the tyres,” Muller told Motorsport.com. “But I think that's a bit too easy, especially as some teams had no punctures in the whole weekend.

“Everyone knows the Nordschleife is a very hard, demanding track for tyres. Even if Yokohama brings a stronger tyre tomorrow, drivers and teams will play with the limit of the tyre to get some performance anyway.

“Incidentally, Yokohama already supplies us with a stronger tyre than it was in the past. What's difficult is finding the right compromise between safety and performance, and we're always at the limit.”

Muller, who retired from WTCC at the end of last season following Citroen’s withdrawal from the series and currently serves as development driver for Volvo, believes a solution would be for Yokohama to set guidelines for pressure and camber that teams would be forced to adhere to.

“Yokohama currently just suggests tyre set-ups for teams,” said the Frenchman. “The teams should have to follow precise guidelines in terms of pressure or camber on trickier tracks like the Nordschleife.

“I can talk about that quite legitimately, because I was part of those who, in the past, criticised tyres when they were a problem. But we also played with the limit.

“We always look for the limit, because every tenth counts. Can you make a tyre that resists better? I'm not sure. But if you could, teams would push it even more to fulfil its potential. It would just shift the issue."