Catsburg hits out at Lopez for Motegi driving standards 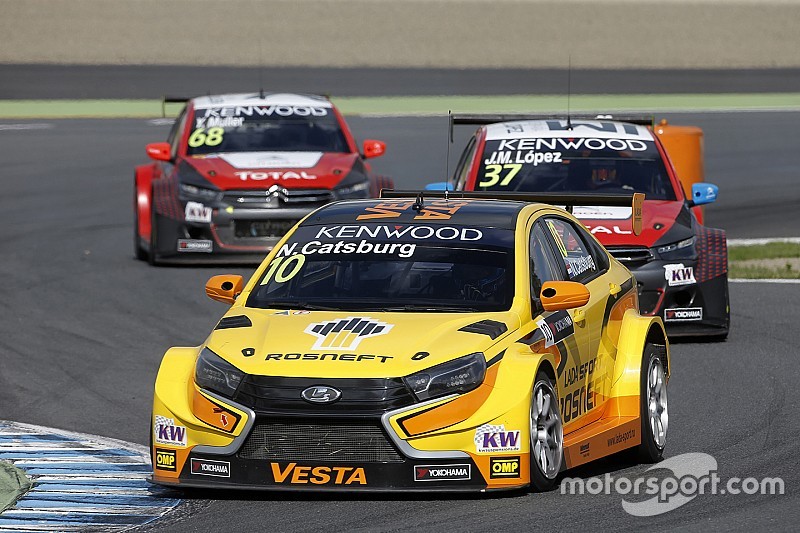 Lada WTCC driver Nicky Catsburg has hit out at the driving standards of some of his rivals after the WTCC round in Motegi, in particular provisional champion Jose Maria Lopez.

The Dutchman was caught up in an incident with Lopez in the first race as the Argentinian charged forward from 10th on the grid.

Catsburg was forced out wide at the hairpin in the incident by the Citroen driver, slicing his Vesta back onto the circuit and hitting the rear of Lopez, which earned him a bad sportsmanship flag.

“I was having a nice fight with Pechito [Lopez], but then he hit me hard in Turn 1 and could have broken my suspension,” said Catsburg.

“He kept trying to pass me there, but everywhere else he seemed to be struggling, so I thought OK, I might be able to keep the position, but then [on lap nine] he forced himself up the inside and runs me wide off onto the grass.

The Dutch driver went on to finish seventh in Race 1 and later vented his frustration on Twitter.

"They just push you out"

In the main race, Catsburg dropped down the order after a troubled start and was then involved in a race-long battle with the Munnich Chevrolet of James Thompson.

“What disappoints me in this championship is that you almost get an invitation to smash people off, because [the stewards] do nothing about it,” he vented.

“[After] Rob pushed me out, in the next corner, I pushed him back, and I should be penalised as well, but they do nothing.

"After the race, [series promoter] Francois Ribeiro comes and says “great television”, but for me, I don’t agree with that.

“Maybe I’m too naive in thinking I can go around the outside, but with James, I’ve had two races now, here and Argentina, where we’ve had fantastic fights.

"He doesn’t push me out, he gives me the room, I don’t push him out, and we have a nice fight, but some of the others guys, including Lopez, they just push you out.”

Over the whole weekend, Catsburg's warning for the clash with Lopez in the opening race was the only reprimand received by anyone in the field.