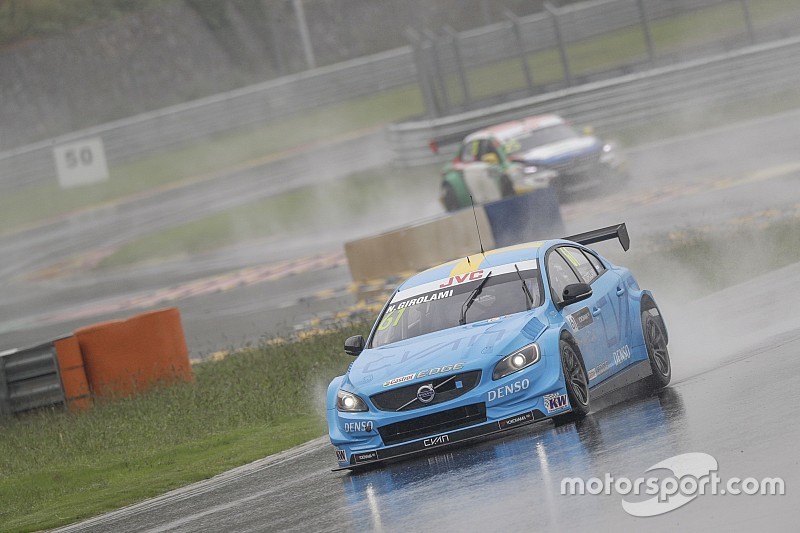 Volvo's Nestor Girolami was declared the winner of the second Ningbo WTCC race, which was red flagged after four laps as adverse weather conditions set in.

While green flag running was achieved in Sunday's opening race, the minimal running in race two all took place behind the safety car before officials declared conditions were too treacherous as heavy rain continued to fall.

Officials announced the race would not be resumed.

"Unfortunately behind the safety car we could see cars could not follow," said WTCC race director Miroslav Bartos. "The race had to be stopped and cannot be restarted."

Girolami led the field around behind the safety car, with four laps of the extended 18-lap schedule completed before drivers were asked to return to parc ferme.

Article 18 of the WTCC's sporting regulations states 'half points will be awarded if the leader has completed more than two laps but less than 75% of the original race distance'.

After some confusion, which included the issuing of updated standings immediately after the race that declared no points had been awarded, half points were later confirmed.

It means Girolami officially scored his first victory in the series, while teammate Thed Bjork assumes the lead of the championship by half a point after he was classified third in his Volvo.

Bjork had trailed absent championship leader Tiago Moteiro by nine points prior to the second race, but moves ahead courtesy of the 9.5 he scored in race two.

Monteiro's teammate Norbert Michelisz is just two points behind Bjork overall, after he was classified second courtesy of his lap that split the leading Volvos in qualifying.

Rob Huff was unable to take up his fourth place starting spot and instead started from the pitlane, but returned to the pits after the first lap of the race with a broken steering rack - a legacy of a clash with Tom Chilton in the opening race.