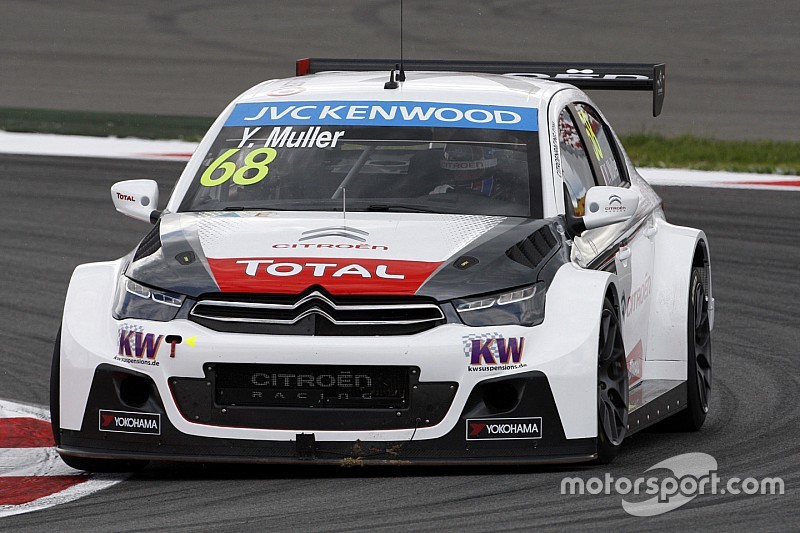 Yvan Muller and José María López followed up their strong qualifying performance with another one-two for Citroën in race 2 at Moscow Raceway.

The sun managed to break through the cloud cover to raise the temperature for race day at Moscow Raceway. With FIA President Jean Todt looking on, Yvan Muller and José María López lined up on the first row of the grid for Race 1.

Yvan Muller got off to a flyer, beating his teammate to the first corner. With Gabriele Tarquini and Rob Huff just behind them, the leading pack consisted of four FIA WTCC World Champions! Ma Qing Hua also got away well, immediately sneaking past Tom Chilton into fifth. Having started from the sixth row, Sébastien Loeb faced a much harder task. The nine-time World Rally Champion climbed to eighth spot early on, but was overtaken by Tiago Monteiro on lap 3.

It’s always easier to win when you’ve got the best car.

There were to be no further changes to the race order before the finish, with Yvan Muller claiming his third win of the season, to go with his victories in Marrakech and at the Nürburgring.

The second race got under way shortly afterwards. This time, Ma Qing Hua was the best-placed Citroën driver on the grid, in fifth. José María López, Yvan Muller and Sébastien Loeb began from ninth, tenth and eleventh respectively.

After making a good start, Ma Qing Hua found himself pushed off the track on the outside thanks to a tumultuous pack at the first bend. The Chinese driver ended lap 1 in fifth position, behind Monteiro, Michelisz, Catsburg and Valente. He was followed by Huff, Tarquini, Loeb, Chilton, Muller and López. The man from Argentina knew that his race had been compromised by his false start, and sure enough, the World Champion was soon handed a drive-through penalty.

As Monteiro pulled away on a victory charge, there were battles going on everywhere in his wake. Ma Qing Hua got the better of his tussle with Sébastien Loeb, reclaiming fifth spot with his teammates hot on his heels. Yvan Muller then found a way past Seb, giving the three Citroën C-Elysée WTCCs fifth, sixth and seventh place and earning the team invaluable points in the Driver and Manufacturer standings.

What they had to say

Yves Matton, Team Principal, Citroën Racing: “This weekend in Moscow has been a great sporting spectacle, with performance levels much closer than we have seen previously. When we get to the next few circuits and the compensation weights are adjusted, we will see whether this was a one-off or a lasting trend. Yvan Muller had a terrific weekend, moving up into second spot in the World Championship and closing the gap on Pechito López. It looks like we could have some interesting meetings coming up, especially when you factor in Sébastien Loeb, who will be looking to come back hard, and Ma Qing Hua, who is getting better all the time!”

Yvan Muller: “It’s always easier to win when you’ve got the best car. And this weekend, the Citroën C-Elysée WTCC was once again the best car out there. I started well in Race 1 and from there I was able to take control. I attacked hard over the first two or three laps, then took care not to wear out my tyres. I held Pechito at bay until the finish. In Race 2, I got away badly, unlike Seb. Sixth place is probably the best I could have hoped for. The way the points have gone has worked out well for me. It’s a long season and I still believe!”

José María López: “Just like in qualifying, Yvan was the quickest driver today. I took a gamble on an aerodynamic setup without much downforce, but I still wasn’t able to put him under pressure. Gabriele wasn’t far behind me and I couldn’t relax at any stage. In Race 2, I messed up at the start and my car moved. I braked, the lights went out and I fell back a few places before being handed a drive-through. Normally, I’m quite hard on myself when I make mistakes. But on this occasion I think I just have to put it behind me. I’ve had the perfect season so far, and I’ll still leave Russia as the World Championship leader.”

Ma Qing Hua: “I’m happy with my two fifth places. It gives me some points and keeps me in touch with Tiago Monteiro in the World Championship standings. Race 2 was exciting. I got away well and found myself in the leading pack, but I got pushed off the track. I was able to come back, but there must have been dirt in my wheels and the handling became a bit erratic. The car got better again as the laps went on and I was able to climb back up to fifth. It was too late to do any better, but I’m happy with that!”

Sébastien Loeb: “I made a mess of qualifying, so I couldn’t expect too much after starting both races from eleventh position. I could have done better in Race 2 if I had got past Ma. I hit him and pushed him out to the side… but I didn’t want to overtake a teammate like that, so I deliberately stayed behind him. When I saw how some of the other drivers knocked into me afterwards, it occurred to me that perhaps I had been a little too nice! I enjoyed driving out there today, though it wasn’t always easy to control the car, especially on the fast bends, as our setups are designed to help us in the more winding sections.”