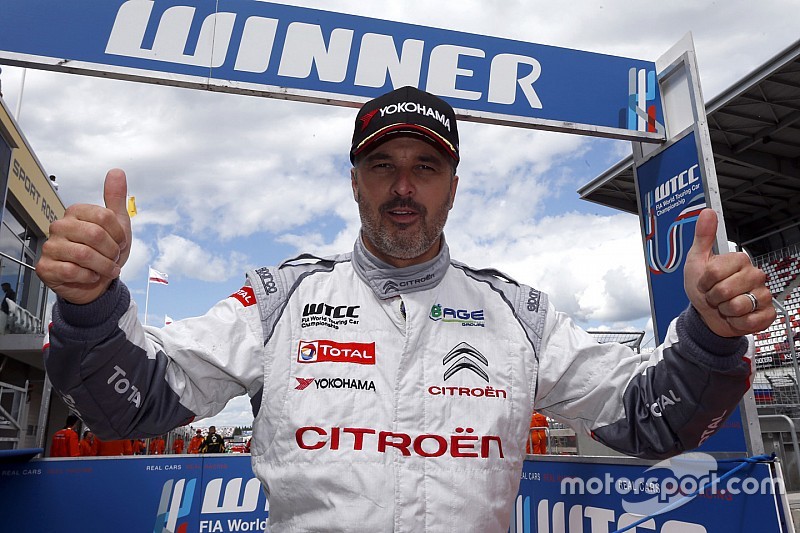 The Citroën C-Elysée WTCCs held off a reinvigorated opposition to claim the top two spots in qualifying at Moscow Race way.

It was clear from Free Practice 1 on Friday lunchtime that the gaps between the performance levels of the four makes of car competing in the FIA WTCC had narrowed significantly. The teams’ tyre strategies, setups adjusted to the unusual nature of the Russian circuit, and changes in the surface meant that it was difficult to gauge the pecking order before qualifying.

So all eyes were on the timing screens as Q1 got under way on Saturday afternoon. Yvan Muller took the honours in the first round, becoming the first driver to dip under the 1m38s mark. José María López, Ma Qing Hua and Sébastien Loeb also made it through to Q2, finishing third, sixth and eighth.

The plan for tomorrow is pretty simple: I’ll have to get away well and stay in front from start to finish!

With just ten minutes to secure their place among the five drivers who would battle it out for pole position, the drivers had to pull out all the stops. This time, it was López who emerged on top, albeit less than 0.1s quicker than Muller! The other two Citroën C-Elysée WTCCs were less successful. Aiming for a good place on the grid for Race 2, Ma Qing Hua ended up with the sixth-fastest time, after his rivals failed to improve as expected. Sébastien Loeb, meanwhile, made a number of errors on his last run and ended up in the most frustrating position of all: eleventh.

The penultimate man to go in Q3, Yvan Muller produced an excellent lap, almost equalling his time from Q1. The four-time World Champion’s performance put him in provisional pole position with just José María López to follow. It wasn’t to be for the Argentine driver, who fell a few thousandths of a second further adrift of his teammate’s time in each successive part of his lap, meaning he had to settle for second spot, just 0.46s behind Muller.

Broadcast live on Eurosport and throughout the world, the two races of the FIA WTCC’s Russian round will take place tomorrow, at 12.15 and 1.25 p.m. (GMT+3).

What they had to say

Yves Matton, Team Principal, Citroën Racing: “As we expected, today’s qualifying session was the closest of the season so far. The compensation weights system is bearing fruit, as all four TC1 models competing in the FIA WTCC were represented in Q3 for the first time. The team progressed nicely through the sessions and our drivers showed their class to monopolise the front row of the starting grid. The gap between Yvan and Pechito shows the intensity of their sporting rivalry.”

Yvan Muller: “We put in some good work in free practice, gradually adapting our setup to the track. Just before Q3, we changed another detail, and that paid off. I really enjoyed my lap. I probably lost a few thousandths of a second here and there, but I didn’t make any mistakes. It’s always satisfying to win pole position, especially when the competition is so fierce. The plan for tomorrow is pretty simple: I’ll have to get away well and stay in front from start to finish!”

José María López: “I’m satisfied with second place. You can’t win pole position every weekend! Yvan was the best driver out there today, so congratulations to him. As far as the championship goes, it’s always good to get into Q3 and notch up a few extra points. I’m happy for the team, because we knew it would be difficult here.”

Ma Qing Hua: “My goal was to finish between eighth and tenth so as to take advantage of the reverse grid in race 2. That seemed to be the most realistic strategy given how well our rivals have been performing this weekend. We made our calculations after Q1 and I clocked the exact time I was aiming for. Unfortunately, the others made mistakes and didn’t improve enough! We didn’t manage to get the place we wanted, but it’s still been a good day. Everything worked well.”

Sébastien Loeb: “Eleventh place in qualifying is probably the most frustrating position to be in, as it means I won’t benefit from the reverse grid. I wasn’t aiming for pole position in race 2. I wanted a place in Q3! But I made a few mistakes on my second Q2 run and Tiago Monteiro overtook me in the final seconds…”