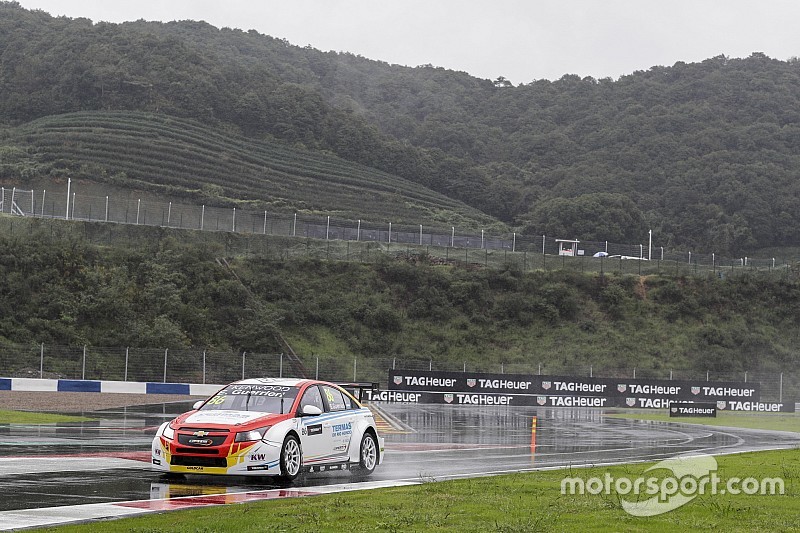 The Chevrolet Cruze driver started the race from fourth but made up two places after a delayed rolling start before clearing early leader Yann Ehrlacher after a mid-race restart and pulling away.

The field spent the first three laps of the race in grid order, with heavy rain necessitating a safety car start.

When racing did get going on lap four, it was the RC Motorsport Lada Vesta of Ehrlacher that pulled an early lead, as John Filippi (Sebastien Loeb Racing Citroen C-Elysee) spent the first racing lap fending off the leading Volvo S60 Polestar of Nicky Catsburg.

While Ehrlacher extended a more comfortable advantage in the following laps, Guerrieri had dispatched Catsburg and Filippi by the time the race was again neutralised at mid-distance after Britons Rob Huff and Tom Chilton collided and abandoned their hobbled cars by the side of the track.

Ehrlacher was given a far harder time on the second restart by the charging Guerrieri and succumbed to the Argentinian on the run off the kink at the end of the start/finish straight to the second corner.

Guerrieri blasted clear in the following two laps to stretch a gap of four seconds back to the Lada and, suitably clear, cruised home in the remaining three laps to win and back up his victory from the opening round of the season in Marrakech.

Ehrlacher was still a comfortable second and well ahead of the sole remaining Volvo of Catsburg, who had reported the race was fine to start during the initial safety car running before complaining with three laps to go that conditions had become too tricky.

Pre-event standings leader Tiago Monteiro remains at the head of the points, after main title rival Thed Bjork was unable to score.

Bjork had started eighth in his S60 but lost out to fellow title hopeful Norbert Michelisz on the opening lap and later appeared to be involved in contact with Mehdi Bennani's C-Elysee that broke the Moroccan's right-rear suspension.

Bennani was not classified and while Bjork did return to the track after a visit to the pits, he ended up five laps down in 13th.

That opened the door for Monteiro's Honda teammate Michelisz to make up ground in the standings, with the Hungarian's fourth-place finish - him having been protected from behind by Monteiro's replacement Gabriele Tarquini throughout the race - drawing him within four points of Bjork and 13 of the overall lead.

Filippi came out on top in a late four-car tussle for sixth place, with he and the following Kevin Gleason (RC Motorsport Vesta) and the Zengo Motorsport Civic of Daniel Nagy each claiming their best finishes in the WTCC.