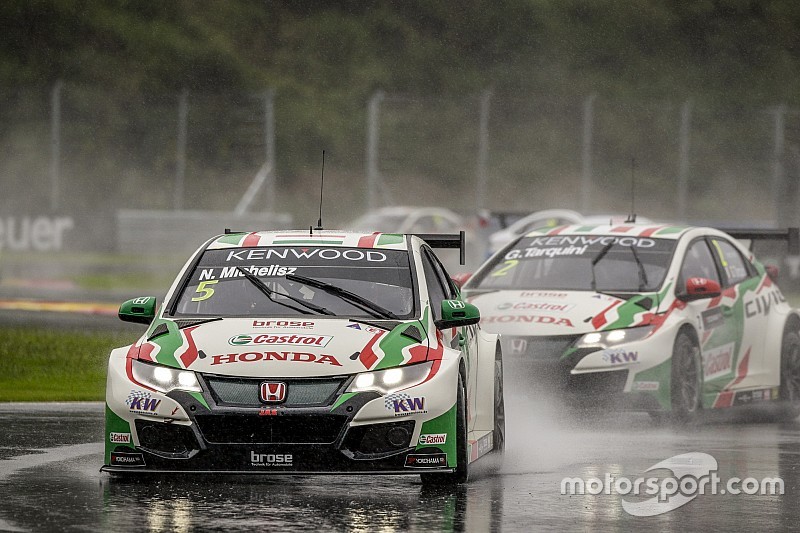 Honda Racing Team JAS has been excluded from all results from the last round of the WTCC round at the Ningbo circuit in China on technical grounds.

An investigation by the championship’s technical delegate ruled the team's fuel injectors were not compliant with the technical regulations.

The exclusion is the second for the Japanese manufacturer in two years, with Honda's cars also excluded from Marrakesh last season. That time the cars' flat floor was found to not be compliant.

The injectors of all of the Honda Civic WTCCs were marked for further investigation during Friday’s scrutineering session in China, with the results of the race marked as provisional.

Following a meeting in Geneva ahead of this weekend's race in Japan, the FIA technical department have ruled that the three cars of the factory Honda Racing Team JAS squad will all be excluded from the results in China, after it was found the team hadn't complied with the homologation procedure.

"At the Race of China the Technical Delegate sealed a fuel injector from car #34 (Ryo Michigami)," reads the stewards' decision. "The Competitor acknowledged that the sealed components were used in all competition at the Race of China and further that cars 2 and 5 used identical components.

The outcome was then confirmed as: "The 3 cars #2 (Gabriele Tarquini), #5 (Norbert Michelisz) and #34 are disqualified from Qualifying, MAC3, Opening Race and the Main Race at the Race of China."

Zengo Motorsport team was also excluded from the results in China due to an identical homologation issue with their fuel injectors to the factory team.

The Hungarian privateer team was excluded after a later hearing at the Motegi circuit.

The decision means Daniel Nagy loses his career-best result from China, but also has significant consequences in the manufacturers’ championship.

With Zengo briefly picking up the manufacturer points for Honda after the factory team’s exclusion, with no Hondas now registering any points in China, Volvo’s lead in the manufacturers’ championship is now a staggering 64.5 points with three rounds remaining.