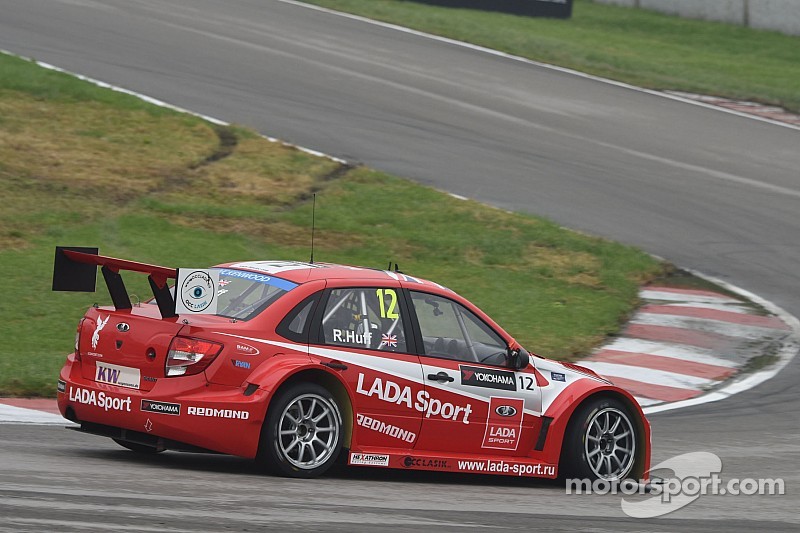 In ecstatic scenes, LADA Sport celebrated its first ever race win at the pinnacle of international touring car racing in the WTCC, the Iconic Bet-backed Rob Huff leading the pack from lights-to-flag in a dominant display, characteristic of a former World Champion.

It was clear from the free practice and qualifying sessions that the Granta’s short wheelbase was suited to the Beijing track’s twisty configuration. James Thompson held the mantle as the fastest of the LADA Sport trio in eighth. However, in FP2 – held on a slippery track at dusk – there were significant improvements in lap time and a superb performance by Huff saw him go second fastest behind local Citroen driver Ma Qing Hua.

Thompson had a better run in qualifying on Sunday morning (5 October), posting the eighth fastest time, while Huff rounded-out the top ten.

In race one there was a lot of jockeying for position away from the start and Thompson was closely shadowed by Huff on the second of 28 laps, as the Safety Car was deployed following a heavy collision between Rene Munnich and Dusan Borkovic.

A protracted delay was followed by a restart on lap 11 and both Thompson and Zengő Motorsport’s Norbert Michelisz were quick to dispatch nine-time World Rally Champion Sebastien Loeb in his all-conquering Citroen.

Huff, backed by Iconic Bet and OCC LASIK, also looked for a way past the Frenchman, but a resurgent Loeb soon found his way back into seventh place at the expense of Thompson, as the LADA Sport teammates came under attack from a quick, but erratic Ma in the third Citroen C Elysee.

With self-preservation for race two a priority, both Thompson and Huff were happy to let Ma go, although the LADA pairing ultimately benefited from a grassy moment for the Chinese driver and misfortune for Gabriele Tarquini to receive the chequered flag in seventh and eighth places respectively.

Young Russian Mikhail Kozlovskiy, meanwhile, initially held 13th position over Tom Coronel and did a superb job to keep the Chevrolet driver at bay until the brawling pair pitted in the closing stages.

There was a high rate of attrition in Beijing, as eight cars were lost to on-track incidents, tyre and mechanical issues, although Kozlovskiy was simply erring on the side of caution by making an unscheduled stop, heeding engine temperature alarms before being sent on his way to complete the race in 11th place, albeit one lap down on the main pack.

Sadly, a small fire broke out at the rear of his car while in parc ferme and the St. Petersburg-based racer could only spectate from the pit lane as his teammates, Huff and Thompson, took up their places at the sharp end of the field for the start of race two.

Huff, who started from pole, sat nervously on the grid, knowing he was on the verge of reaching yet another significant milestone in LADA Sport’s history, and the Briton used a superb start to lead Coronel’s ROAL Motorsport Chevrolet Cruze into Turn 1, as Thompson was passed by both Loeb and Michelisz.

The 2012 WTCC Champion maximised his opportunity, using clean air and relatively fresh Yokohama tyres to stretch his legs out front and build a 3.2s advantage over Coronel, who was busy fighting a rear-guard action against Loeb.

The LADA Sport team held its breath in anticipation as Huff reduced his pace and managed the gap to Coronel, but the Briton had everything under control and nursed his Granta Sport home to the flag to achieve a momentous maiden victory for his LADA Sport team, while Thompson took the finish in sixth position to secure yet more invaluable championship points.

“I am on top of the world and so thrilled to give LADA Sport its first ever race win in the FIA World Touring Car Championship,” said Huff. “This is a result of all the hard work and determination that has gone in to the project and it shows that, when you keep pushing anything can be achieved. Who would have thought this was doable before Argentina! The team has worked tirelessly and we have taken a significant step in the right direction in recent weeks and months, as the car has genuinely felt fantastic and, now we have the taste for victory, there’s no telling what’s possible!”