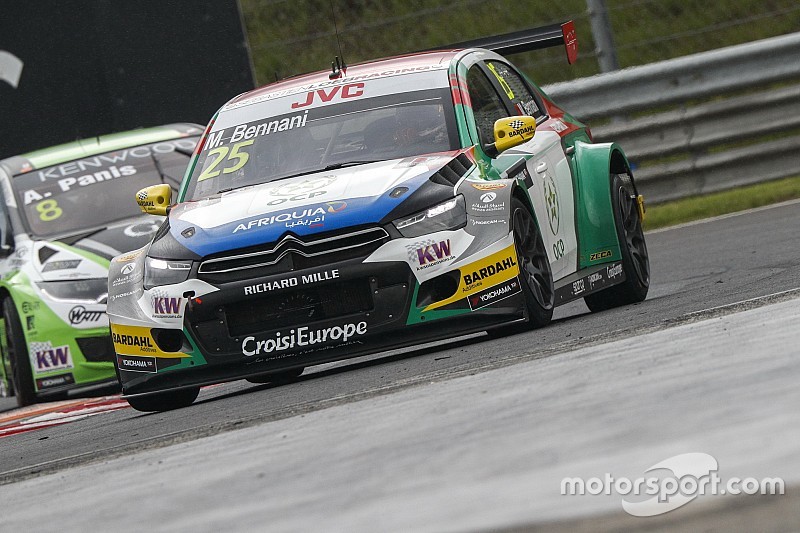 Mehdi Bennani took his first WTCC victory of 2017 in the second race at the Hungaroring, as polesitter Rob Huff was handed a penalty for contact.

Sebastien Loeb Racing driver Bennani launched into the lead at the start of the race and while he relinquished that advantage to Huff after an early safety car, that proved to be inconsequential as Huff was forced to drive through the pits for his part in a first lap incident.

Bennani duly managed the gap back to Nicky Catsburg over the remainder of the race to snatch his first win since the Qatar season finale last year.

Huff tried to squeeze across to the right at the start of the race but could not prevent Bennani from taking the lead, while the Volvos of Catsburg and Nestor Girolami were also able to squirrel up the Briton’s inside on the run to Turn 1.

Munnich Motorsport man Huff then braked late into Turn 2 but ran into the back of Catsburg, forcing the Dutchman into the side of teammate Girolami who stopped on the outside of the corner as a result.

That necessitated the appearance of the safety car for two laps, but as the race resumed Huff was hit with a drive-through penalty for the Turn 2 incident and, despite briefly taking the lead back from Bennani with a fine move at Turn 9, was forced to dive into the pits at the end of lap four.

That left Catsburg chasing Bennani at the front, but despite initial warnings about his Citroen’s brakes the Moroccan gradually edged away at the front from the Volvo, laden with 80 kilograms of success ballast.

Catsburg did come back at the Sebastien Loeb Racing driver in the closing laps but could not offer a real challenge and eventually finished 0.654 seconds behind Bennani, who became the fifth different winner from six races at the start of the 2017 season.

Bennani’s SLR teammate Tom Chilton jumped Honda’s Norbert Michelisz at the start of the race and inherited third as a result of the Turn 1 altercation and Huff’s subsequent penalty, a position he held to the finish to deny Hungarian Michelisz a home podium.

Michelisz’s Honda team-mate Tiago Monteiro finished a comfortable fifth to consolidate his championship lead, the Portuguese backing up his race one victory with further points, having started the main affair from ninth.

Esteban Guerrieri had started the race from third but dropped back off the line and finished sixth in his Campos Racing Chevrolet, ahead of the third Volvo of Thed Bjork.

Yann Ehrlacher again finished a lonely eighth, while Huff’s recovery drive was limited to 10th as he tailed ROAL Motorsport driver Tom Coronel over the line.