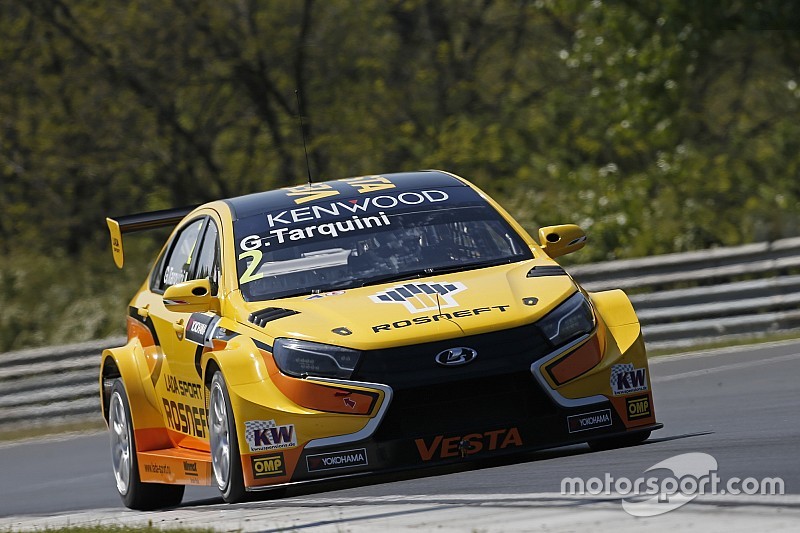 The top position honours changed hands a number of times throughout the 30-minute session, but was never once held by a Citroen, who are much fancied following the compensation weight increases for Lada and Honda heading into this weekend.

Nicky Catsburg set the first benchmark in his Lada Vesta WTCC, before he was toppled by ROAL Motorsport’s Tom Coronel in his Chevrolet Cruze.

The Hondas and Ladas traded fastest times throughout the mid-part of the session, with Tiago Monteiro (Honda), Catsburg (Lada) and then Norbert Michelisz (Honda) moving to the fore.

Tarquini’s best lap came in the last ten minutes of the session, with the Italian lapping the 4.4km circuit with a time of 1m47.929s.

This, despite being one of five drivers to receive a black & white flag by the stewards for exceeding track limits, along with Honda drivers Rob Huff and Monteiro, Lada teammate Catsburg and ROAL's Coronel.

A number of laps were also deleted after drivers were judged to have taken shortcut at Turn 4.

Tarquini ended up on top in his Vesta, carrying 50kg of compensation weight this weekend, ahead of the unballasted Volvo S60 of Fredrik Ekblom, by just over a tenth of a second.

Home hero Michelisz was third fastest in his Honda, just ahead of current points leader and teammate Monteiro, with Lada’s Catsburg completing the top five.

The best placed Citroen was that of Muller in sixth, with reigning champion teammate Jose Maria Lopez ninth fastest.

Coronel was the best-placed of the privateer drivers in eighth, also the quickest of the Chevrolets, while the Campos Racing-run Chevrolet of John Filippi had limited running in the session, stopping with an apparent engine issue after just four laps.