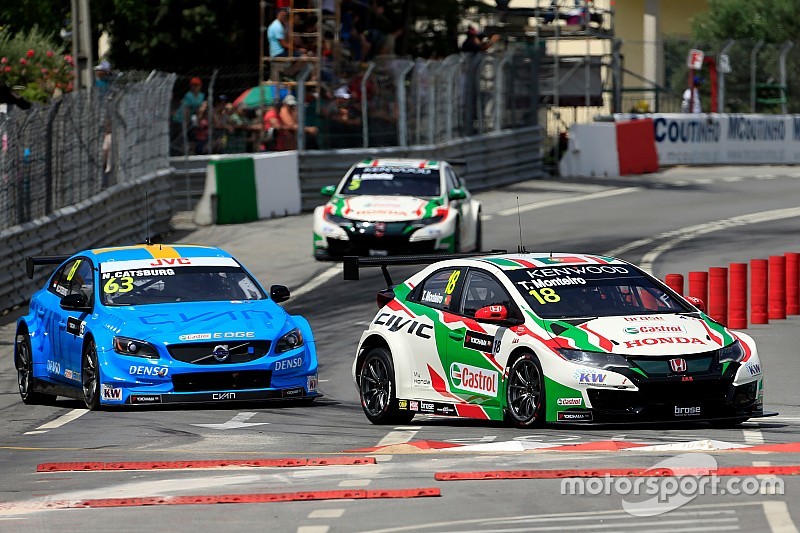 WTCC drivers have praised the series’ introduction of a joker lap at last weekend’s round in Vila Real in Portugal.

Joker laps were written into the WTCC’s regulations for 2017 – under the loose proviso that they would be used on street circuits – and were meant to be debuted at the season-opening round in Marrakech in April.

Circuit restrictions and political instability forced those plans to be abandoned, but a joker lap section was approved for use in Vila Real last weekend.

Last-minute changes were made to the joker when teams voiced safety concerns, with an additional acclimatisation session added to the schedule, but drivers expressed their support for its introduction after Sunday’s two races.

Honda’s Tiago Monteiro profited from the joker in the opening race, holding station in fourth after he’d served his before gaining two positions when Ryo Michigami and Nestor Girolami later took theirs, and said organisers deserved recognition for making the format work.

“Starting from seventh and fourth, I just wanted to score as many points as possible,” said Portuguese Monteiro, who reclaimed the championship lead with second- and third-place finishes.

“Two podiums on a track like this where it’s hard to overtake wouldn’t have been possible without the joker lap.

“It was a good success and well done to the organisation, to Eurosport Events, to [WTCC head] Francois Ribeiro, to the circuit as well as Vila Real to have put this together in such a short time.

“It was not easy, they were working until very late last night trying to sort it out. In the end I think the result was quite good. At least for me it paid off, definitely in the opening race.

"The Main Race I didn't gain anything, didn't lose anything, but still I think it’s a small plus.”

Volvo driver Thed Bjork, who followed Monteiro through the joker in race one, added: “It worked out really well. It was introduced in quite a short time and they really fight and pushed to make it happen.

“It worked out well for us and it’s more tactical, there are a lot of things to think about. You’re always a little bit afraid in the beginning about new stuff, that’s normal, but it worked out really well.”