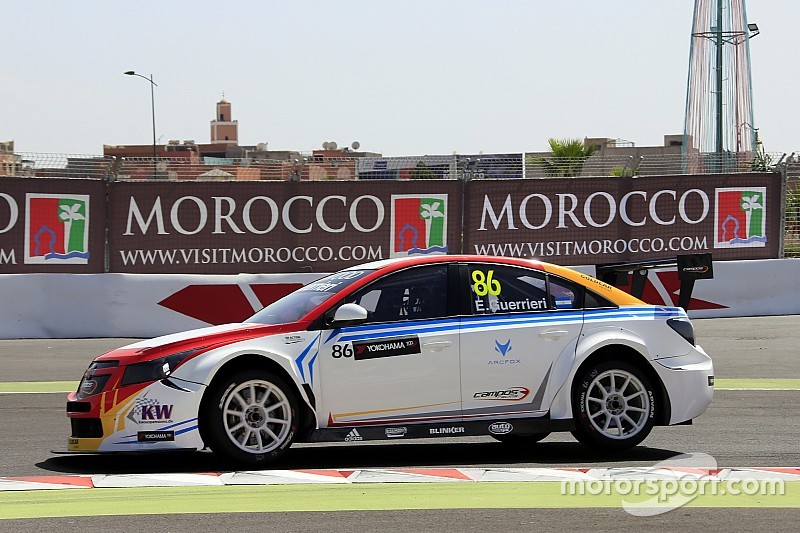 Argentinian Esteban Guerrieri claimed a surprise victory on just his third WTCC start in the opening race of the 2017 season in Marrakesh.

Guerrieri had started from second, but pushed initial leader Tom Coronel throughout the first half of the race before assuming the lead when Coronel ran wide.

The Campos Racing driver led from there to the finish in his Chevrolet Cruze on the first weekend of an expected five-round 2017 campaign, having made a one-off debut in Argentina in 2016.

Guerrieri retained his second place at the start of the race behind the similar ROAL Motorsport car of Coronel, but the race was soon neutralised as a result of a startline crash.

Sebastien Loeb Racing driver John Filippi stalled on the line, leaving the RC Motorsport Lada Vesta of Yann Ehrlacher – who had been due to start the reversed-grid race from pole before a post-qualifying penalty – with nowhere to go but into the back of the Citroen C-Elysee.

Filippi was able to return to the pits unassisted, but with Ehrlacher’s car stranded on the main straight the safety car was called with cars instead diverted through the pitlane.

When racing resumed on lap five, Coronel led a seven-car train – the lead pack having been separated from the remaining cars that had erroneously followed Rob Huff into the pits when he pulled in with a reported power steering problem – but failed to make a break, and quickly came under pressure from Guerrieri.

With the Dutchman looked increasingly uncomfortable and struggling with his brakes, that pressure told as Coronel ran wide at Turn 3 and dropped behind the train, handing Guerrieri the lead.

Guerrieri was more comfortable in the lead that Coronel had been, and led home Volvo driver Thed Bjork over the line by 0.654 seconds.

Home favourite Mehdi Bennani claimed the final spot on the podium having pressed Bjork throughout in his SLR Citroen, as he headed the second Volvo of Nicky Catsburg and the works Hondas of Norbert Michelisz and main race polesitter Tiago Monteiro.

Tom Chilton completed a pair of opportunistic overtakes late on to claim seventh ahead of the ailing Coronel and Nestor Girolamis Volvo.

Aurelien Panis claimed the final point on his WTCC debut, the Frenchman profiting from Zengo Motorsport team-mate Daniel Nagy retiring from ninth late on after smacking a wall three laps from the finish.