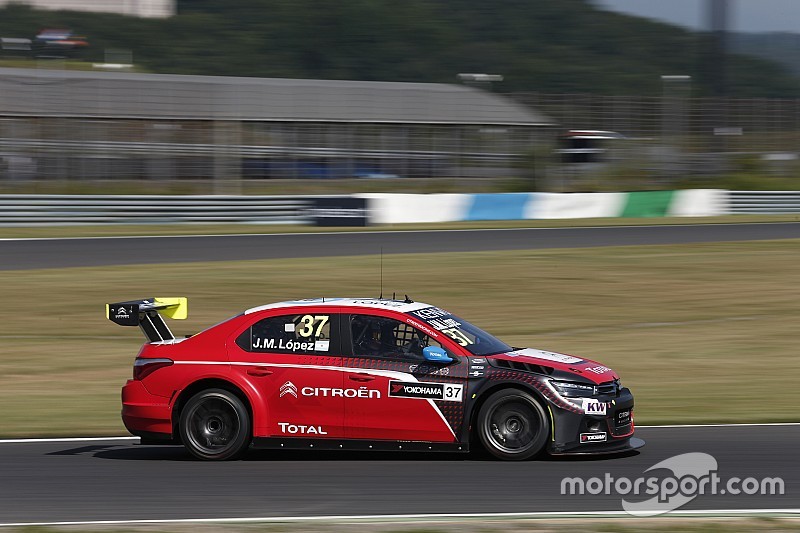 Jose Maria Lopez has won his third World Touring Car Championship drivers’ title in Japan, while Citroen teammate Yvan Muller secured his first win of the 2016 season after Lopez allowed him past with one lap to go.

Lopez looked set to put on a showcase lights-to-flag victory in the main race at Twin Ring Motegi, but the Argentinian slowed and allowed his Citroen teammate to take the victory as a gesture on the penultimate lap, meaning Muller scores his first win of the season and now moves to joint-second in the standings with Honda’s Tiago Monteiro, who finished third.

Lopez had a perfect getaway at the start of the race and led into Turn 1 ahead of Muller, with Monteiro immediately jumping ahead of Mehdi Bennani’s privateer Citroen to grab third.

The race was relatively static up front, while the first main battle was for fifth, as Tom Chilton in the Sebastien Loeb Racing-run Citroen fought to keep back the Polestar Volvo of Nestor Girolami.

Chilton was holding up a train of cars, with Girolami followed by the two Hondas of Norbert Michelisz and Rob Huff, with Thed Bjork in the sister Volvo behind them.

The Swede picked his way past both the Hondas on laps two and three, while Girolami made his way past Chilton at Turn 4 on lap five, with the top ten all holding station until the penultimate lap.

Lopez, leading the race and on course to win the drivers’ championship following the impending cancellation of the Thailand round, then allowed Muller past, with the Frenchman scoring his first win of the 2016 season.

“For me, it’s a way to say thank you to Yvan,” said Lopez after the race. “For me, it’s not easy to give up a victory, but for me, the person deserved it, so thanks to him.”

Lopez now leads the drivers’ championship by 120 points over both Monteiro and Muller with 110 points available from the remaining two rounds in China and Qatar, securing his third drivers' title before his departure to the Formula E Championship next season with DS Virgin Racing.

Citroen’s 1-2 means they’re now 208 points ahead in the manufacturers’ standings, but with 210 available from the final two race meetings, the French marque will have to wait until at least the next round in China to be sure of the crown.