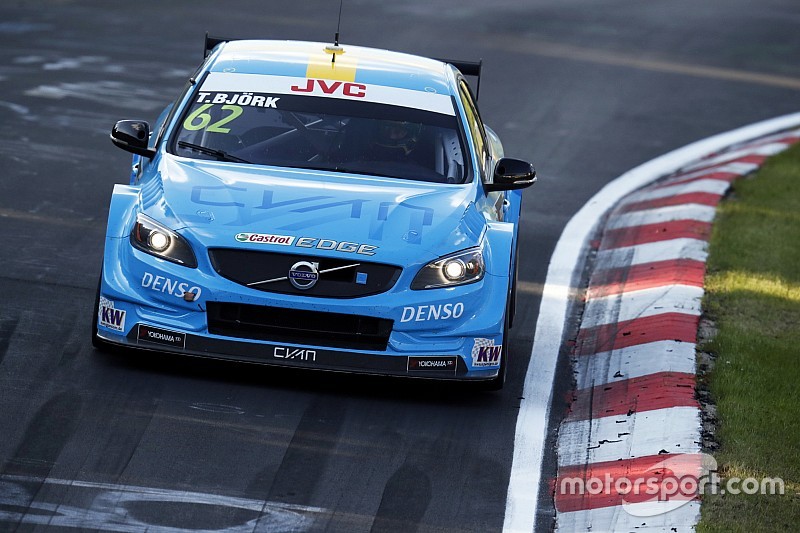 Volvo driver Thed Bjork took his second win of the WTCC season in the opening race at the Nurburgring, while punctures on the final lap took out both Honda’s Tiago Monteiro and Volvo’s Nestor Girolami.

Bjork catapulted into third from sixth on the grid in his Volvo, while polesitter Girolami held off the Sebastien Loeb Racing Citroen of Mehdi Bennani into the first corner to lead.

A trio of moves took place at the Dottinger Hohe straight at the end of the first lap. Bjork passed Bennani’s Citroen for second; Tom Chilton in his Citroen passed Guerrieri’s Chevrolet for fourth; and Rob Huff in the Munnich Citroen got ahead of Monteiro’s Honda for sixth.

On the second lap, Bjork slipstreamed past teammate Girolami to take the lead again at Dottinger, with Huff scything past Guerrieri’s Chevrolet for fourth.

It was then drama again for Monteiro at the Nurburgring, with the Portuguese driver suffering a puncture for the second year in a row on the final lap of the opening race, dropping out of sixth position.

Girolami suffered a puncture soon after himself and dropped out of second.

Bjork went on to take the win by 2.5s from Bennani, with Huff grabbing third from Chilton on the Dottinger Hohe straight on the final lap.

Guerrieri held on for fifth from the Volvo of Nicky Catsburg, who passed Norbert Michelisz on the final lap as the Honda driver backed off to protect his car for the second race, which he begins from pole.

Monteiro continues to lead the championship, but his lead has been cut to 22 points. Bjork is now in second, with Volvo teammate Nicky Catsburg five points behind.

Monteiro furious at Yokohama: "You cannot play with lives"