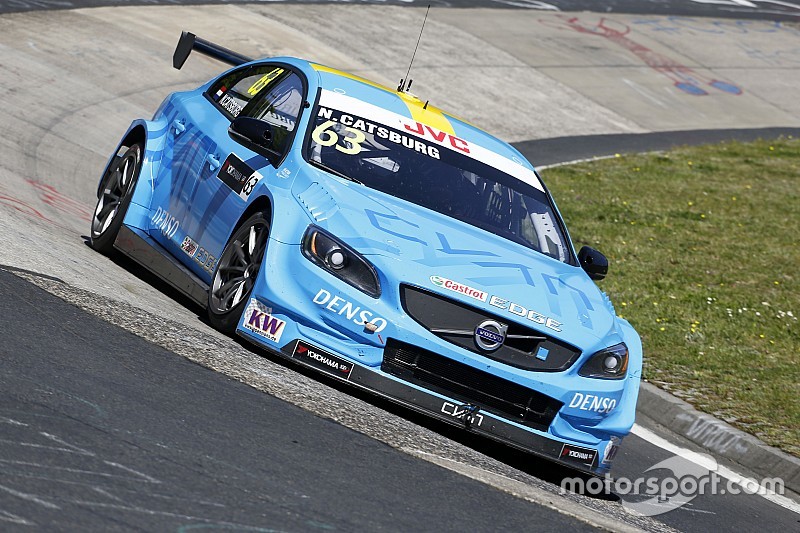 Volvo driver Nicky Catsburg broke the WTCC lap record at the Nurburgring in the second practice session on Friday, lapping the legendary circuit in 8m34.813s.

The Dutchman set his time after the chequered flag fell on his final run, demoting Honda’s Norbert Michelisz, who had only just gone fastest with a time of 8m37.201s, to second place.

Michelisz, in turn, outpaced the Munnich Citroen of Rob Huff, who’d been on the top of the timesheets for most of the last half hour of the session.

Catsburg had set the first benchmark early in the session, with no further improvements possible until the half-way point while the ETCC Audi of Plamen Kralev was rescued after stopping at the exit of Schwalbenschwanz.

Behind Catsburg, Michelisz and Huff was Volvo’s Thed Bjork in fourth, with Esteban Guerrieri fifth fastest after setting a competitive lap in the Campos Racing Chevrolet.

Nestor Girolami was eighth fastest in the third Volvo ahead of Tom Coronel’s Chevrolet, with the SLR Citroen of Mehdi Bennani completing the top 10.

Unlike Thursday, there were no signs of punctures during the 60-minute session. The only drama was traffic, with a number of WTCC drivers getting caught behind some of the TCR-specification ETCC cars at awkward points on their quickest laps.