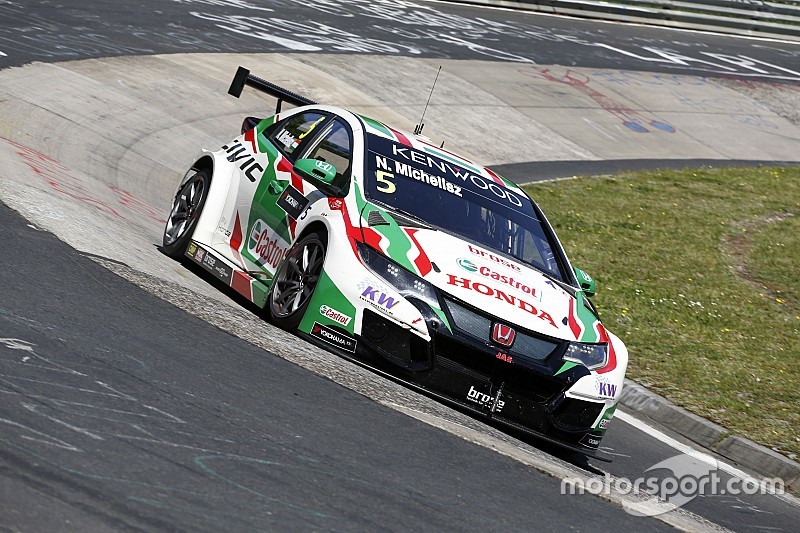 Honda’s Norbert Michelisz topped the first WTCC practice session at the Nurburgring despite suffering a puncture on his last run that nearly sent the Hungarian into the barriers.

Michelisz topped the session with a time of 8m43.255s ahead of Munnich Citroen driver Rob Huff, but the two Hondas of Michelisz and Tiago Monteiro were set to improve further before both hit troubles on their last runs.

Volvo driver Nicky Catsburg had put down the first competitive benchmark of 8m47.034s in the Volvo, before the yellow flags were out for over 20-minutes after an accident involving RC Motorsport Lada driver Yann Ehrlacher.

The 20-year-old Frenchman crashed off soon after Brunnchen, with an apparent power steering failure, crashing hard into the barriers and limping away from the damaged car.

When the car was recovered, Michelisz soon went fastest with a time of 8m43.255s, almost five seconds faster, and was nearly beaten by Huff, who only missed out by eight tenths of a second despite running wide off circuit soon after making his way past the ETCC SEAT of Andreas Pfister.

Michelisz was fastest in sectors three, four and five before a puncture nearly sent him in the barriers at Turn 64, with the Hungarian pulling over and stopping on the track.

At almost the same time, Honda teammate Monteiro stopped on circuit with a fuel pump issue while he was set to improve, and managed to bring his car back into the pits.

Huff then also suffered a tyre issue a the end of the session and slowly returned the pits, with punctures fast becoming the story of the day after both the Volvos of Thed Bjork and Nicky Catsburg had failures in the earlier test session.

Tom Chilton finished the session third in the Sebastien Loeb Racing Citroen ahead of Catsburg, who didn’t improve on his earlier time, with ROAL Chevrolet driver Tom Coronel setting a last-minute improvement to go fifth.

“We’re a World Championship, and we’re seeing punctures left right and centre and it’s not good enough,” said Huff after the session. “Yokohama have to do something about this.”