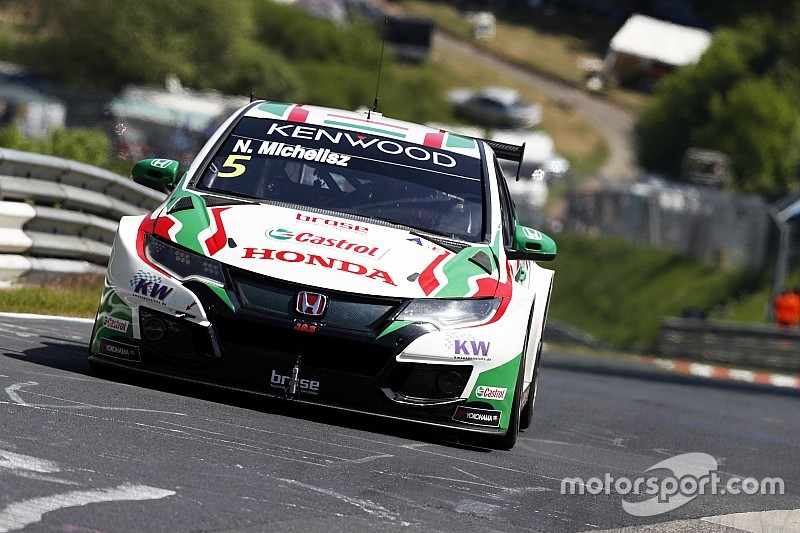 Honda’s Norbert Michelisz has taken pole position at the Nurburgring Nordschleife, with practice pacesetter Nicky Catsburg unable to challenge after suffering a vibration on his final run.

Michelisz produced a stunning lap around the 25km circuit in the 40-minute qualifying session, which took place in much warmer conditions than this morning’s practice session.

The Hungarian's time was 8m38.072s, six tenths of a second faster than Volvo driver Catsburg, with the Nurburgring expert having to back off in the final sector while he was set to improve, reporting a problem with his front-right tyre.

Rob Huff, who had topped the Thursday morning test session, suffered a technical issue ahead of his final run on the Grand Prix loop, but was able to go around again and start another lap.

The Munnich Citroen driver took third with a steady lap, 1.5s from Michelisz and slotting ahead of championship leader Tiago Monteiro in the Honda.

Thed Bjork was the second fastest of the Volvos in fifth, while teammate Nestor Girolami was set to improve before the team advised him to back off after he was safe in 10th, which would secure him pole position for the opening race on Saturday with the reversed grid.

Tom Chilton was sixth in his Sebastien Loeb Racing-run Citroen ahead of ROAL Motorsport Chevrolet driver Tom Coronel, the SLR Citroen of Mehdi Bennani and the Campos Chevrolet of Esteban Guerrieri.

Honda’s Ryo Michigami just missed out on the top 10 in the Honda, while Yann Ehrlacher qualified 12th in the repaired RC Motorsport Lada, with the 20-year-old Frenchman sporting a limp in the paddock since his crash in FP1 on Thursday evening.