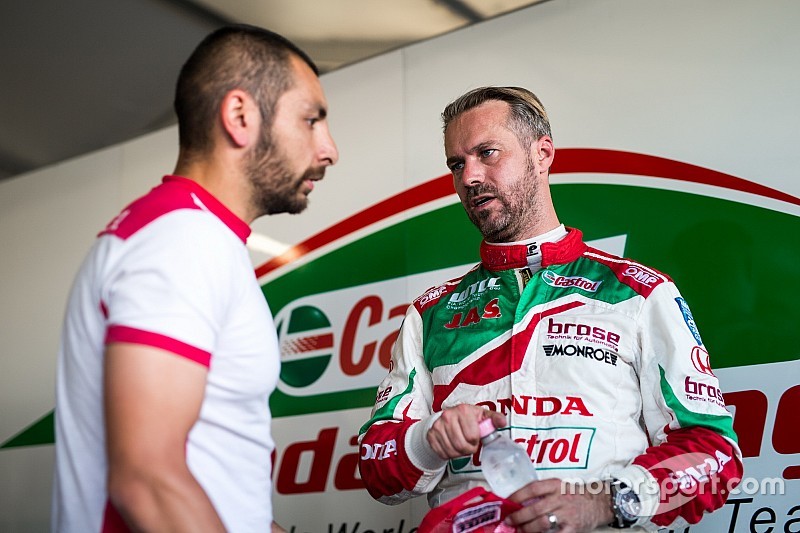 WTCC championship leader Tiago Monteiro has been forced to withdraw from this weekend's races in China on medical grounds.

His absence is a consequence of the heavy crash that the Portuguese racer suffered in testing at the Circuit de Barcelona-Catalunya on September 6.

The Honda driver has a slender 12-point lead over Polestar Cyan Racing driver Thed Bjork in the standings heading to this weekend’s race at the Ningbo International Speedpark.

Monteiro's teammate Norbert Michelisz is 29 points adrift, with 60 available from each given WTCC weekend.

Monteiro has been focussed on getting back to full fitness after suffering compression of the nerves in the 255km/h crash at the Barcelona circuit’s first corner following a brake failure. He has had continuing problems with his vision, though it’s believed he will still make a full recovery.

The Honda Racing Team have recruited former driver Gabriele Tarquini to replace him this weekend. Tarquini was responsible for the development of the TC1-specification Honda Civic WTCC, and was racing just last weekend in the TCR International Series, where he’s also the development driver for the new Hyundai i30 N TCR, taking victory on the car’s competitive sprint racing debut.

“I’m incredibly disappointed that I cannot race in China,” said Monteiro. “As a team, we’ve worked incredibly hard to make it to the top of the championship and this is a huge setback to everybody.

"Unfortunately, the human body is what it is, and despite the outstanding efforts of my medical team, I just need more time. My focus now shifts to returning to fitness in time for Motegi later this month and resuming my title challenge there.

“I must say a big 'thank you' to Gabriele for stepping in. He’s a great friend and was a fantastic teammate for many years in the WTCC, so there’s nobody else I’d rather have in the car to support my title push.”

Tarquini, returning to the WTCC for the first time after his former team, Lada Sport, withdrew from the championship at the end of 2016, added: “I’m pleased to return to the Castrol Honda World Touring Car Team this weekend, although I wish it had been in happier circumstances.

"Tiago is a fantastic driver who has rightfully earned his place at the top of the championship and it’s a real shame he has to miss this weekend.

“I’ll do the very best job I can for Tiago and the team this weekend and hope that the combination of my experience of the Civic WTCC from 2014-15 and the levelling factor of a brand-new circuit can help me fight for a strong pair of results.”

Monteiro explains crash that knocked him out