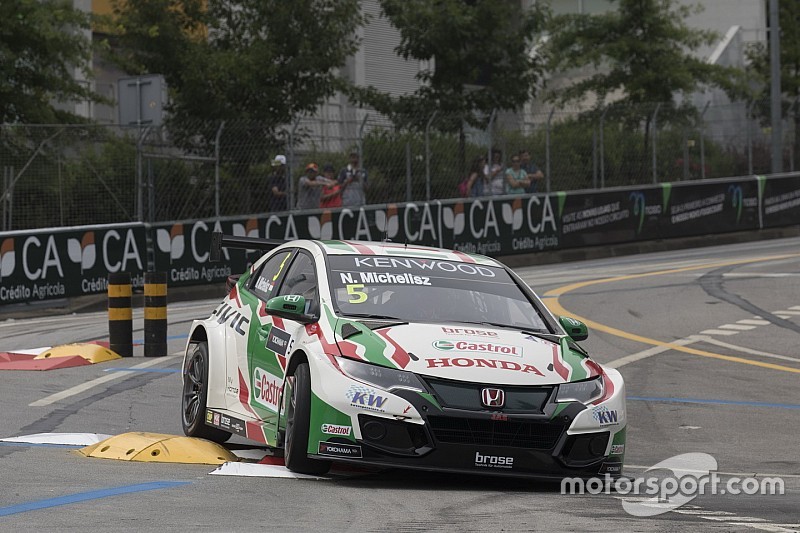 Tiago Monteiro emerged as the main threat to teammate Michelisz, after the Portuguese driver topped the first two parts of qualifying, with the Honda duo going safely through into the Q3 top five shootout.

Joining the Hondas in the top five were the two Volvos of Nicky Catsburg and Thed Bjork, and the Munnich Motorsport-run Citroen of Huff.

Earlier, Bjork had gone quickest in Qualifying 1, but his lap was deleted after he cut the turn 19 chicane and knocked off a bollard.

The incident caused a red flag which helped Volvo complete repairs on Nestor Girolami’s car, which had hit the barriers at Turn 5 at the start of the session and the bonnet had flown up as a result of the damage.

This allowed Girolami to set one lap and make it to Q2, demoting the RC Ladas of Kevin Gleason and Manuel Fernandes as well as the Zengo Honda of Aurelien Panis, the trio eliminated in Q1.

In Qualifying 2, Monteiro led the way from Michelisz, Huff, Catsburg and Bjork, while Ryo Michigami found himself 10th, securing pole position for the opening race with the reversed grid.

In the one-lap shootout, championship leader Catsburg aborted his lap suffering with a vibration, giving his teammate Bjork a clear run to be the best-placed Volvo.

Huff followed and set a time in the mid-1m56s to take provisional pole, but Michelisz went faster on a 1m55.846s.

Monteiro was last out, but the Portuguese driver was slightly behind Michelisz in the first two sectors, and lost time by pushing too hard at the Turn 26 roundabout.

Thus, the local driver had to settle for fourth.

Michelisz’s pole is his second in a row, after also setting the pace at the Nordschleife last month.