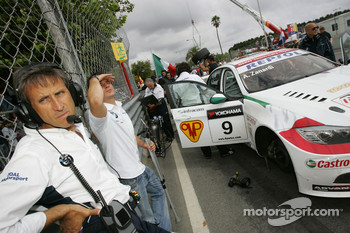 The FIA WTCC will be back this weekend in Curitiba (Brazil) for the 2011 season opener. ROAL Motorsport, after one year of absence, return to the world touring cars championship with the new BMW 320TC powered by the brand new turbo 1.6 liters engine introduced in the latest technical regulations. The Brazilian round will also celebrate the official debut of the Dutch driver Tom Coronel with the team: thanks to his speed and experience he will be a further strong point of the team.

Roberto Ravaglia (ROAL Motorsport, Team Principal):
"We are extremely satisfied by coming back to racing in WTCC: this is going to be an interesting championship involving cars powered by turbo and aspirated petrol engines as well as diesel ones. During winter tests we never had the chance to compare ourselves with other teams therefore it is difficult to say what our real potential is, but we know we can count on the huge development work done by BMW Motorsport on the BMW 320TC and on the new 1.6 turbo engine".