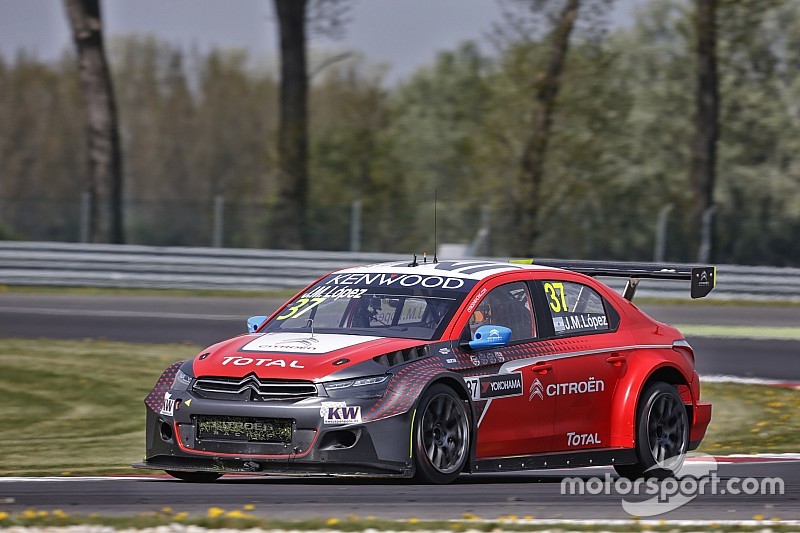 The Dutchman lost ground to both Lopez and Honda's Tiago Monteiro on the last lap, with the Portuguese leaving Slovakia leading the championship by one point.

At the start of the race, Lopez took the lead ahead of teammate Yvan Muller, but first-corner contact with Catsburg saw the Frenchman drop down to third, followed closely by the Honda trio, with Monteiro ahead of Rob Huff and Norbert Michelisz.

An investigation in respect of the contact between Catsburg and Muller ended up with no further action taken by the stewards, just as the Lada driver got closer to Lopez.

Catsburg eventually passed the Citroen to take the lead and thereby build a margin. Lopez, meanwhile, was left defending from Monteiro, while Muller dropped back after being passed by the Portuguese and then made contact with Huff.

After spending a few laps defending from Monteiro, Lopez began to catch Catsburg and with two laps to go, he was all over the Lada's rear bumper.

Meanwhile, Huff went off at Turn 6, leaving fourth in the hands of teammate Michelisz.

It was all down to the last lap, when Lopez made good use of a better exit out of the last corner to make a pass on Catsburg.

Monteiro took advantage from them going three-wide on the main straight as the Argentinian took the lead, and Monteiro was able to also pass Catsburg's Lada for second.

More drama was to come as Michelisz started attacking the Lada from fourth, but only ended up being caught by Volvo's Thed Bjork, who overtook him after they touched.

The Swede claimed Volvo's best result in the WTCC since its return to the championship. Michelisz would finish fifth ahead of Muller, suffering a puncture right before the took the chequered flag.

Fredrik Ekblom went from the back of the grid to ninth in a solid race, finishing ahead of Tom Coronel who completed the top ten in the best-placed Chevrolet Cruze.

Monteiro still leads the championship, after moving ahead in the opening race, by just one point over Lopez, with Michelisz in third, 27 points shy of the leader.

Bjork disqualified from both races in Slovakia