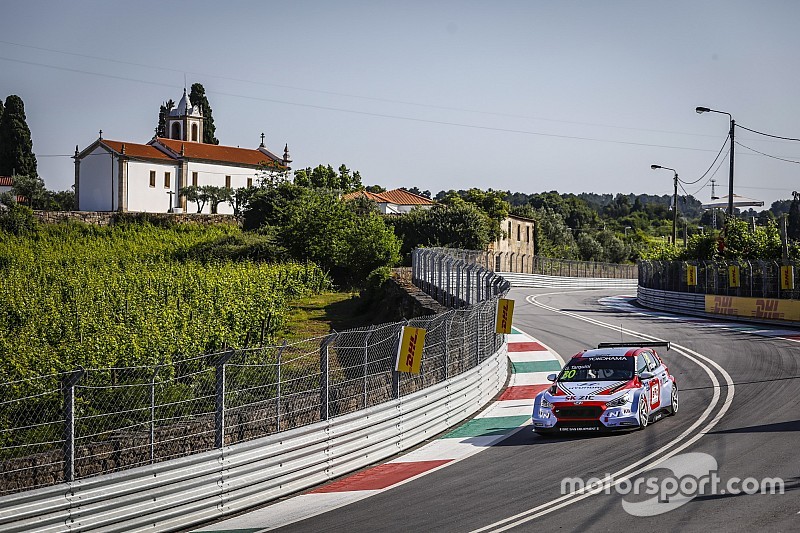 Tarquini has been unwell with flu throughout the Vila Real weekend, which has featured air temperatures in excess of 30C.

He started Sunday's final race from third, but jumped BRC Racing teammate Norbert Michelisz - whose wrist was injured in an opening lap crash in Saturday's first race - for second on the opening lap and finished runner-up to Thed Bjork.

"It was a very tough weekend for me because the weather conditions and the temperature probably is not the best to [race in] with [the] flu and high fever I got yesterday," said Tarquini.

"Yesterday I felt a little bit better [but] today in qualifying I was not able to do one lap - [I] made a lot of mistakes, used a lot of tyres. It was very, very tough but I thought I must try.

"The car was very good and I must thank the BRC Hyundai team [for its] support and for giving me this fantastic car that even two half drivers like me and Norbi [Michelisz] proved on this track is really, really good.

"I think Thed was uncatchable - probably even if I felt good. He was very, very fast.

"I was really, really happy to follow him and to finish because after the race I was very close to collapse.

"I don't feel a lot of power now, but enough to survive."

Michelisz was hit in the opening race by Rob Huff, who had made contact with Sebastien Loeb Racing teammate Mehdi Bennani, and was not allowed to take part in the race when it resumed because his rollcage had been damaged.

The Hungarian, who finished race three in third, said he had considered telling his team he could not drive before the start of Sunday morning's qualifying session as a result of the pain in his wrist.

"Yesterday I was close to packing my bags and going back home," said Michelisz, whose car was transported 60 miles away from the circuit in the night so its rollcage could be repaired.

"The whole day was a bit tricky because of my wrist, which was injured yesterday.

"The first time this morning I sat in the car, after 30 seconds when I tried to manoeuvre the steering wheel I just thought about how I can explain to the team that I'm not able to drive.

"Then, I tried to put my teeth together and just took it easy in qualifying and it was working a bit better than expected - in the race as well."