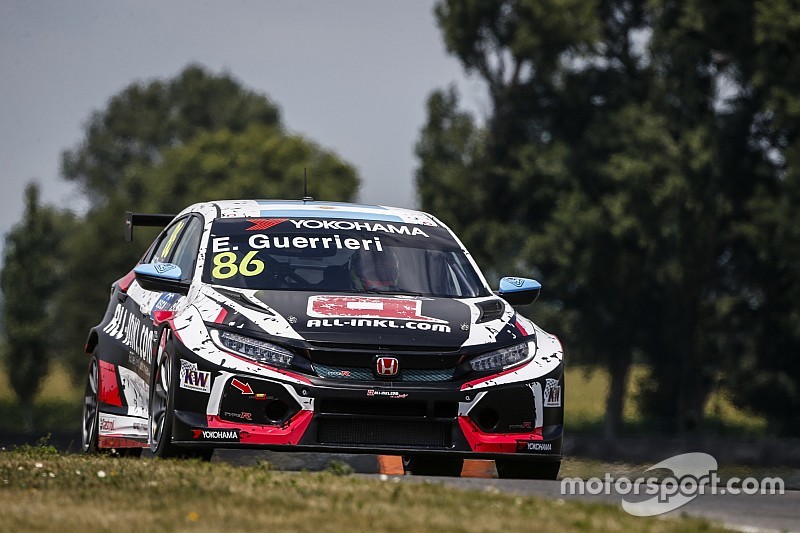 Both customer Honda World Touring Car Cup teams have lodged appeals against decisions made by stewards in Slovakia relating to maximum boost levels.

A day after three of the four Hyundai WTCR cars were excluded from first qualifying for exceeding maximum boost pressures, the Hondas of Esteban Guerrieri (Munnich Motorsport), Tom Coronel and Benjamin Lessennes (both Boutsen Ginion) were deemed to have breached the same controls.

Coronel's and Lessennes' cars were also adjudged to have exceeded their maximum engine speed values (rpm).

Stewards decided to exclude all three cars from Saturday's qualifying - which set the grid for the second and third races - as a result, but Munnich and Boutsen appealed against this.

The late release of the Hondas from parc ferme resulted in the start of race two being delayed, while the appeals meant the grid formed in its provisional order without the exclusions applied.

As the appeals were against decisions made by the stewards, all three - one for each of the decisions against Guerrieri, Coronel and Lessennes - will have to go through the FIA court of appeal and be lodged by Munnich and Boutsen's respective ASNs.

The process means the results of second qualifying and races two and three will remain provisional until the cases have been heard.

A further investigation into all four Hyundai World Touring Car Cup cars found the cars were compliant with WTCR regulations.

The Hyundais were kept in parc ferme for more than four hours after Friday evening's qualifying session while ECU checks were carried out by the onsite FIA technical team.

Three of the four cars - those of Norbert Michelisz, Yvan Muller and Thed Bjork - were found to have exceeded their revised maximum boost pressure, issued ahead of the Slovakia round, and were excluded from qualifying as a result.

Gabriele Tarquini's BRC Racing car was found to be compliant and the Italian retained his race one pole position as a result.

Technical report #2 - which also included free practice tyre checks and various in-session and post-qualifying controls - said all cars "were found in compliance with" WTCR regulations except for those of Michelisz, Muller and Bjork.

It also confirmed further checks of the ECUs of all four Hyundais, including Tarquini's, will be required to determine whether they comply with article 6.4 of the technical regulations (relating to the engine control unit).

"The compliance of the ECU with article 6.4 of the Technical Regulations of the Cup must be checked in accordance to the method described in such article, hence, further investigation is needed and the parts in the car must be seized," read a statement in the report.

But further tests of the cars' ECUs, completed on Saturday, found that they did not contravene regulations.

ECU choice is free among in WTCR, but any "manipulation, modification or disconnection" of an ECU sensor is not permitted and "software and all data sets are frozen and cannot be overwritten".