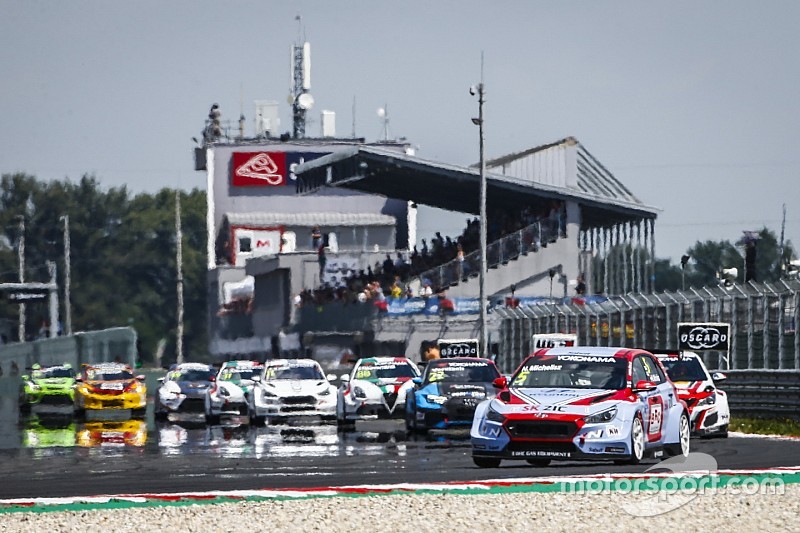 Rob Huff has urged the World Touring Car Cup to "sort out" its Balance of Performance after a "terrible" Slovakia Ring weekend in which he failed to score a point.

The Golf GTIs were saddled with the maximum WTCR compensation weight of 60kg, in part thanks to Huff's pole positions in Vila Real and at Zandvoort in May, and struggled for pace all weekend.

All three VWs - the two SLR cars and wildcard entrant Andrej Studenic - were slowest in both Friday and Saturday qualifying, while Huff's best result was a 14th place in race three.

Huff said the disparity between the pacesetting Hyundais and the VWs was too large to simply be accounted for by the extra 30kg the Golf GTIs ran with in Slovakia.

Under the current BoP, the Golf GTI's minimum racing weight is 10kg less than the Hyundai's, while it also runs 20mm lower than the i30 N and has 2.5% more engine power available.

“It’s been a terrible weekend, and not for the right reasons," said Huff.

"The guys have done a fantastic job getting the new cars ready for this weekend after the trouble we had in Portugal, and it’s a shame to be repaying their efforts with a zero-score weekend.

“Unfortunately, it’s fairly clear where the problem is, and there’s something the championship needs to sort out.

“In Qualifying 2, we found more pace but were still 1.8 seconds from the Hyundais.

"We know because of the pace we had at Vila Real in Portugal we’re a little heavier this weekend, but we’re only 10kg heavier than them, and they have a power reduction and are 20mm higher than us, so with that they should be the same as us, not nearly two seconds faster."

Three of the four Hyundais were excluded from Friday's first qualifying for exceeding maximum boost pressures, while three Hondas were also excluded from second qualifying for the same offence - although the Boutsen Ginion and Munnich Motorsport teams appealed those decisions

Huff said organisers now had adequate time to address BoP inconsistencies before the Ningbo round in late September.

“We had no performance this weekend, and no chance to fight," he added.

"We had a local driver [Studenic] in a Golf at the race this weekend, and we were also 1.7 seconds faster than him, and he’s been around this track 40 times and holds the lap record in a Ferrari around here.

“It’s been a frustrating weekend for all of us, and with BoP the talking point of the weekend, with Hyundais and Hondas being excluded left, right and centre, clearly something needs to be done.

"I hope they [WTCR organisers] use the two months break until the next round to find a solution, as this isn’t what we’re here for.”