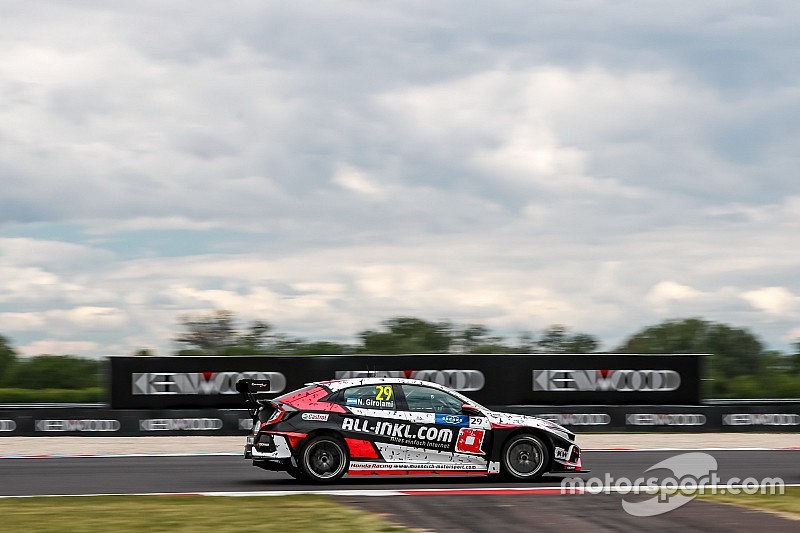 Nestor Girolami sealed a third WTCR victory of the season at the Slovakia Ring to extend his championship lead, leading home Munnich Motorsport teammate Esteban Guerrieri in a Honda one-two.

After failing to finish the opening race of the day, front-row starter Girolami chased and passed pole-sitter Rob Huff, making his decisive move on the second lap at the tight third corner.

Intermittent light showers resulted in officials declaring it a wet race, although slicks remained the preferred tyre choice for the second nine-lap contest of the day.

After Girolami made his move for the lead on the 2012 World Touring Car champion, Guerrieri soon mimicked the pass a lap later to make it a one-two for the Honda pairing which they would not surrender.

“My car was really damaged after race one so we had a doubt for this race”, said Girolami. “After [repairs] the car was perfect, so thank you to all of the guys here.

"It’s an amazing weekend for us. As soon as I realised Esteban was P2, I knew we were safe. It’s the way that we work.”

A simple run to the flag was made tense by the presence of the charging Alfa Romeo of Kevin Ceccon, the Italian recovering from a sluggish getaway that left him playing catch-up.

The Mulsanne driver was soon on the tail of third-placed man Huff in the second half of the race, and slipped by his rival on the faster section of the circuit to confirm a second podium in succession for the Alfa squad.

Huff began to struggle in the final laps of the race and was soon overpowered under braking for Turn 1 by Nicky Catsburg in the best of the BRC Racing Hyundai cars, the Dutchman having fought back to fourth from 10th on the grid.

Fifth went to Huff ahead of Norbert Michelisz in another Hyundai, Mikel Azcona best of the Seat Cupras after a strong showing for PWR Racing, despite the team losing Daniel Haglof to problems early in the race.

Niels Langeveld put his race one incident behind him as top Audi driver in eighth place, the Comtoyou man briefly running fifth. The second Alfa Romeo of Ma Qing Hua was involved in a first-lap scuffle, but recovered well to ninth.

The biggest charge of all came from Tom Coronel, who charged into the top 10 despite starting from 27th and last on the grid, after a puncture in qualifying blighted the Comtoyou Seat Cupra driver’s Friday efforts.

Gabriele Tarquini’s race was ruined by a drive-through penalty for contact with the Comtoyou Seat Cupra of Aurelien Panis, finishing 19th in his BRC Racing Hyundai.

Thed Bjork’s disappointing Sunday continued as contact on the opening lap put the Cyan Racing man out with front-end damage to his Lynk & Co, while Augusto Farfus was spun out on the same lap in his Hyundai.