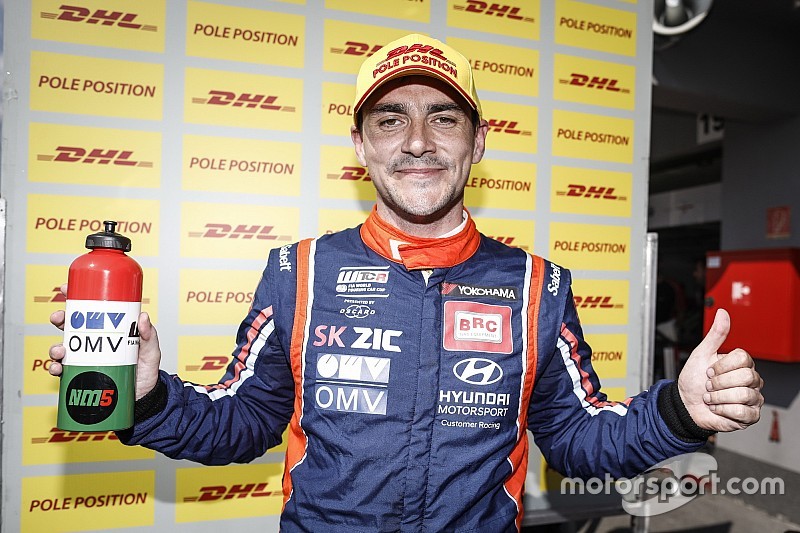 Michelisz, who provisionally qualified second for race one but was later one of three Hyundai drivers to be excluded for exceeding the car's maximum boost pressure, was fastest in the first two segments of qualifying before sweeping to pole in the Q3 shootout segment.

The Hungarian was six thousandths slower than Aurelien Comte's Peugeot through the first sector, but clawed back more than half a second in the sector two and went on to claim a third qualifying pole of 2018 by 0.237 seconds.

Leading Honda contender Esteban Guerrieri was third despite going one thousandth slower than he managed in the second part of qualifying in the shootout, having forfeited half a second in the first sector in his Munnich Motorsport Honda.

He will start ahead of Yvan Muller, who was a quarter of a second faster than Guerrieri in the first sector but lost time in sector two then locked up at the penultimate corner and ended up 0.022s slower, and John Filippi (Campos Racing SEAT).

Filippi's teammate, race one winner Pepe Oriola, was the last driver to have a realistic shot of making the pole position shootout, but could only improve to sixth on his final Q2 run despite recording the session's fastest final sector of all.

Norbert Nagy made Q2 for the second time this season and secured pole for Saturday afternoon's reversed-grid race with the 10th fastest time, ending the second session faster than the Audis Nathanael Berthon and Jean-Karl Vernay.

While Michelisz, Muller and Tarquini all made it through safely to the second part of qualifying, other frontrunners missed out.

Muller's nephew Yann Ehrlacher improved on his final run in the first session but could only drag his Munnich Motorsport Honda to 13th, missing out on a place in Q2 by 0.036s in a tight first session.

Thed Bjork fared even worse in his YMR Hyundai, improving only to 19th with four minutes to go before backing out of his final run.

Bjork was bemused by his lack of pace, saying he had "no excuses" and that "the lap time was not there".