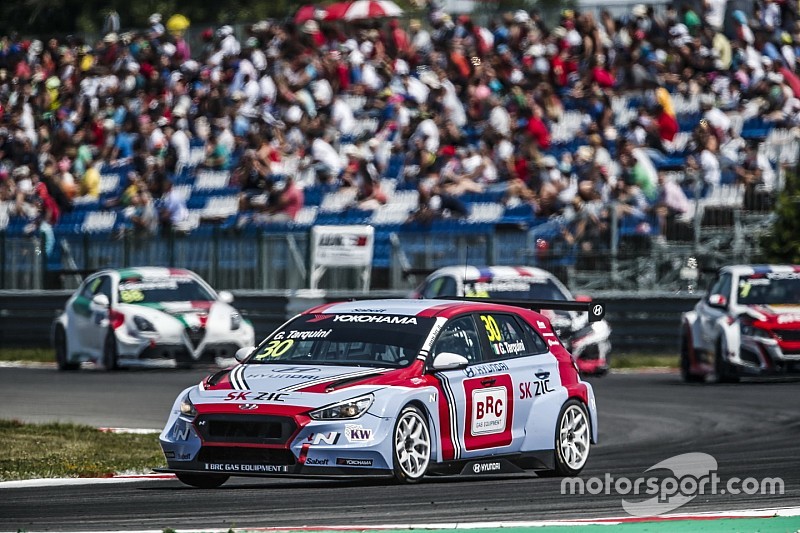 Tarquini did the hard work at the start and nosed ahead of polesitter Norbert Nagy into the first corner before easing clear at the front of the field, beating Nagy and Muller home.

Having struggled away from pole in Saturday's first race, BRC Racing driver Tarquini made a much better getaway in the second encounter, holding onto the inside line from Nagy and fending off a spirited challenge from the Zengo Motorsport driver as they came out of the second right-hander.

Tarquini's route to victory was straightforward thereafter, the Italian slowly eking out a lead from Nagy over the remaining nine laps to win by 2.150 seconds.

Nagy, who had not previously scored a point this season, initially came under pressure from Muller's YMR Hyundai but shook off the four-time World Touring Car champion's challenge to claim a maiden podium.

Race one winner Pepe Oriola brought his Campos Racing SEAT home in fifth, at the head of a four-car train.

Benjamin Lessennes was the highest-finishing Honda in sixth, but his car was one of three Hondas found to have exceeded its maximum boost pressure after qualifying - just as three of the four WTCR Hyundais had been a day earlier.

Both Munnich Motorsport and Boutsen Ginion protested against those decisions, which caused the start of the race to be delayed and meant the grid was based on the result of qualifying - with the three Hondas in their original reversed-grid positions.

John Filippi made it two Campos SEATs in the top six, resisting Norbert Michelisz - who produced a late charge through the field - by 0.003s.

Comtoyou Racing's Frederic Vervisch was the only Audi driver to finish in the points, ahead of the Munnich Motorsport pair of Esteban Guerrieri - whose car was another one of the three Hondas deemed non-compliant after qualifying - and Yann Ehrlacher.

Muller's YMR teammate Thed Bjork fell just short of the points, advancing from 19th on the grid to 11th, ahead of Kevin Ceccon - who finished half a second shy of the points on only his second WTCR start.