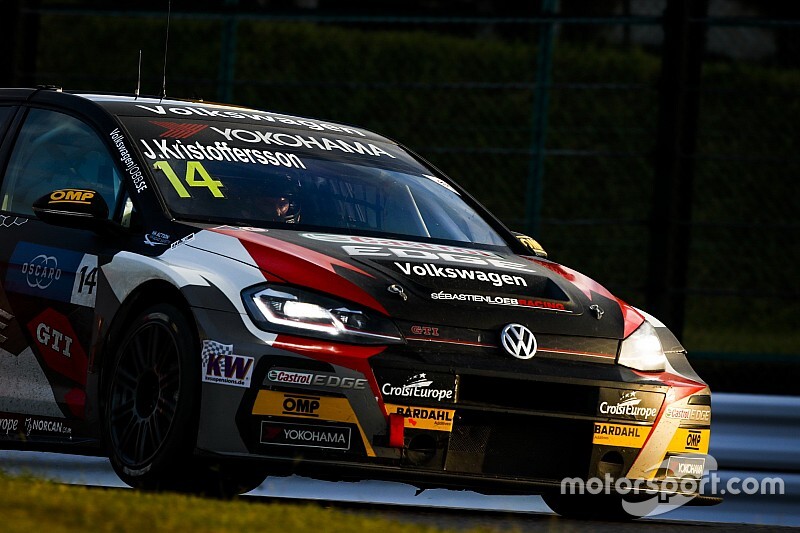 Johan Kristoffersson stormed to his second World Touring Car Cup victory in the final race at Suzuka, after Norbert Michelisz had briefly moved into the points lead by winning Race 2.

Sebastien Loeb Racing driver Kristoffersson was beaten off the line in Race 3 by a fast-starting Tiago Monteiro, who appeared to have sealed the lead.

But Kristoffersson stayed on Monteiro's bumper through the first corner, then muscled his Volkswagen up the inside of the Honda driver to reclaim first.

An early safety car kept the leading pack together, but Kristoffersson soon pulled clear of the pursuing Hondas and was only denied a winning margin of five seconds by the reappearance of the safety car on the final lap.

Esteban Guerrieri was gifted third at the start when fellow second-row starter Mikel Azcona stalled, but spent the majority of the race behind Monteiro while he and his KCMG team queried whether Kristoffersson's pass to reclaim the lead had been legal.

Race control did not indicate this would be investigated at any point, though, and Monteiro finally allowed Munnich Motorsport driver Guerrieri through on the antepenultimate lap.

Monteiro should have claimed third from there, but a bizarre turn of events meant he instead finished fourth.

However, both Ceccon and Monteiro received post-race penalties - Ceccon for contact while passing Rob Huff, and Monteiro for his pitlane incident - that dropped them to sixth and 10th respectively.

That opened the door for Bjork to claim the final podium spot ahead of Gabriele Tarquini, while Andy Priaulx - who was involved in a controversial race-one clash with Nicky Catsburg - moved up to fifth ahead of Ceccon and Huff (Volkswagen Golf GTI).

Behind Bjork, Gabriele Tarquini (Hyundai) was sixth, while Andy Priaulx (Lynk & Co) - who was involved in a controversial race-one clash with the Hyundai Nicky Catsburg - was seventh ahead of compatriot Rob Huff (Volkswagen).

Guerrieri's second place moved him back into the points lead, after he had briefly been surpassed in the standings by BRC Racing Hyundai driver Michelisz.

Starting from pole for the Sunday morning reverse-grid race, Michelisz first moved across to block second-place starter Huff on the approach to the first corner, running the Volkswagen driver into the pitlane exit in order to secure an early lead.

Michelisz, who was shown a black-and-white driving standards flag for that action, gradually eased into a one-second lead in the first half of the race, but Huff came back at him late on and spent the closing laps within four tenths of the Hyundai driver.

Huff's Volkswagen did not have enough grunt to challenge Michelisz, though, allowing the Hungarian to claim a fourth win of the season - the biggest one-season tally he has managed in his World Touring Car career.

Ceccon spent the majority of the race in Tarquini's slipstream but his best chance came on the penultimate lap as he moved to the outside on the approach to the first corner.

While he was able to get his nose ahead of his Italian compatriot, Ceccon was tapped out wide by Tarquini, who was then able to hold the position to the finish.

Bjork also finished fifth in that encounter, a pair of results that moved him ahead of Cyan Racing teammate Yvan Muller for third in the drivers' standings.