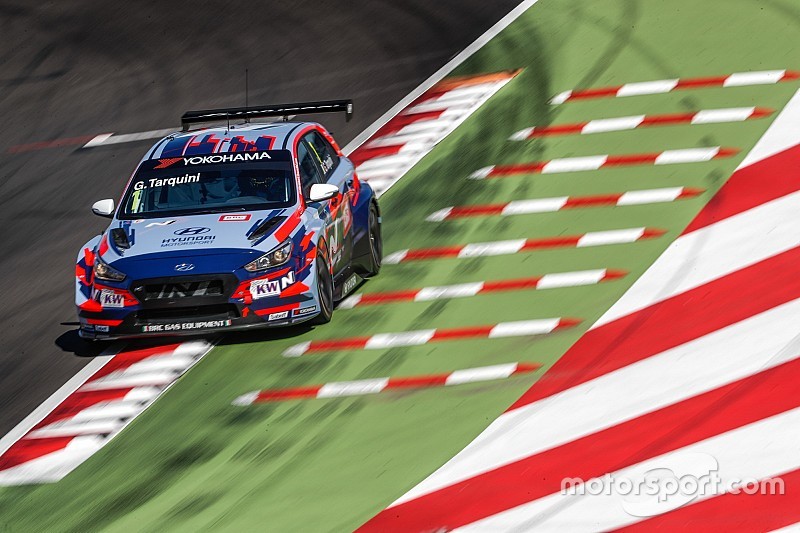 Tarquini had trailed BRC teammate Catsburg by a second in the first half of the race, but inherited top spot when the lead Hyundai man went off at Turn 10.

Catsburg was in the braking zone for the tight left-hander that leads onto the back straight and had just started to turn in when his i30 N car suddenly went to the right and into the barrier on the outside of the corner.

The recovery of Catsburg's car required the intervention of the safety car but, although that bunched the pack up, Tarquini effectively guaranteed himself victory by catching the rest out on the restart - breaking well clear of Jean-Karl Vernay's WRT Audi on the run to the penultimate corner.

The Italian had an advantage of two seconds when racing resumed on lap 15 of the extended 20-lap distance, and pulled a further 1.3s clear of Vernay in the final laps to claim victory.

Vernay had stayed with the leading Hyundais prior to Catsburg's crash, and ended up a comfortable second - six tenths ahead of Yann Ehrlacher's Cyan-run Lynk & Co 03.

As had been the case in Saturday's first race, Ehrlacher struggled to stay in touch with the cars he was following but was not troubled by the pursuing Esteban Guerrieri.

Race one winner and early points leader Guerrieri forfeited a position to the fast-starting Ehrlacher on the run to the first corner and, despite applying pressure in his Munnich Motorsport Honda Civic Type R in the first part of the race, instead had to focus on fending off the leading Cupra of Mikel Azcona late on.

TCR Europe champion Azcona, who earlier in the day made the Q3 pole position shootout in only his second WTCR qualifying session, finished 0.155s behind Guerrieri.

Thed Bjork was two seconds further back in his Lynk & Co 03 but still ahead of teammate Yvan Muller, both of whom jumped eighth-place finisher Tiago Monteiro (KCMG Honda) at the start when the Portuguese got boxed in behind Azcona.

Andy Priaulx brought the fourth Cyan Lynk & Co home in 13th ahead of the Comtoyou Cupra of Tom Coronel, while Gordon Shedden scored the final point in 15th.

Ma Qing Hua had been on course to finish 12th on his second start for the Team Mulsanne Alfa Romeo squad, but pitted with a puncture under the safety car and was classified 24th.