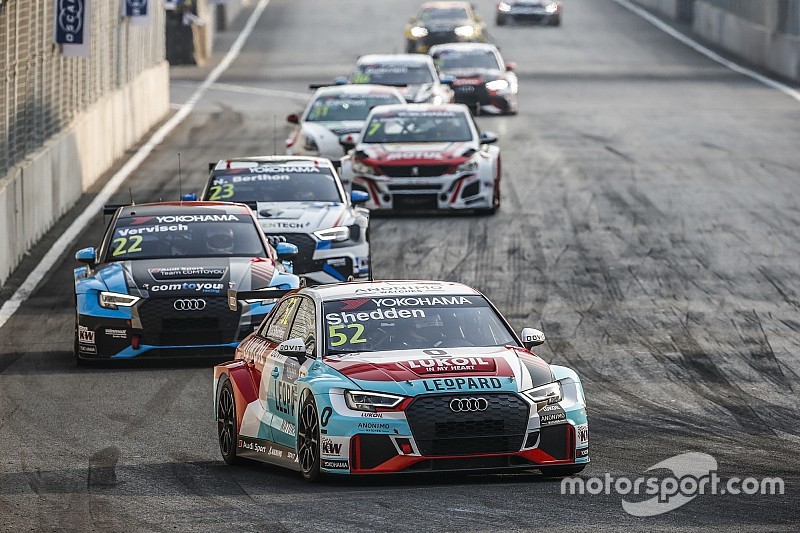 A day after scoring his first podium since switching to the WTCR world cup for 2018, three-time British Touring Car Championship Shedden sealed pole position on Sunday morning and led every lap of the race on his way to a first win at world level.

That dominance masked how difficult Shedden's task was, though, as the WRT driver's Audi survived two hits from behind, while he also held off a spirited charge from Vervisch in the closing stages.

Shedden, whose car's steering rack was changed before the finale after an opening-lap incident in race two, was tapped sideways by Denis Dupont (Comtoyou Audi) at Turn 1 but kept his foot in and retained the lead from Esteban Guerrieri, who straight-lined the corner in his Munnich Motorsport Honda.

The race was almost immediately neutralised when Aurelien Comte was pushed into the wall exiting the Turn 6 right-hander by Jean-Karl Vernay, with Comte's Peugeot collected by an unsighted Rob Huff (Volkswagen Golf).

Guerrieri was asked under the safety car to drop behind Dupont and Frederic Vervisch after skipping past the two Audis at the first corner, ceding position four laps before the lap-nine restart.

Shedden was therefore again pursued by Dupont when the race restarted, as the leading three Audis edged away from Guerrieri.

Dupont then clumsily punted the tyre stack at the Turn right-left 10 on lap 11 - tagging Shedden, who survived - which resulted in a second safety-car period being called.

With the fast but less-experienced Dupont out of his way, Vervisch went with Shedden in the opening laps after the second restart as the top two stretched their legs.

Vervisch was never more than half a second behind Shedden in the final laps, but was not able to find a way past Shedden - who credited his success to WRT for repairing his car in time for the finale.

After his pair of lairy moments in the first half of the race, Dupont faded away from the lead battle but came through to score his second podium in as many weekends.

Leading Honda contender Guerrieri drove a brilliant final part of the race to hold off Nathanael Berthon for fourth, despite his exhaust dragging along the ground throughout the second half of the race.

For a second race in a row Berthon found a way past Campos Racing SEAT driver Pepe Oriola, but a sixth-place finish was nevertheless enough to move Oriola up to fourth in the drivers' standings - the best of the non-Hyundais.

Ma Qing Hua had the most competitive race of his two-round deal with the Boutsen Ginion Honda outfit to finish seventh ahead of Kevin Ceccon, with race two winner Mehdi Bennani and YMR Hyundai driver Thed Bjork completing the points.

Monteiro to make racing return in WTCR Suzuka round