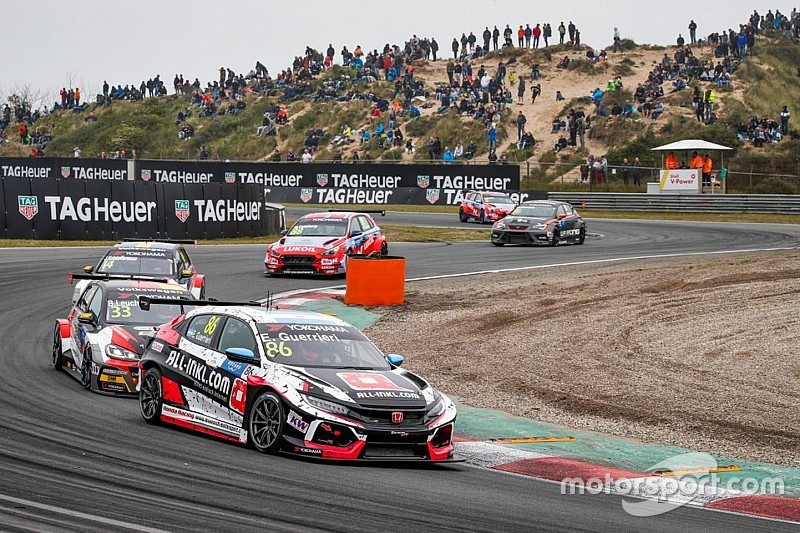 Thed Bjork's victory in Saturday's first race elevated the Cyan Racing driver to third in the drivers' standings and, given Bjork will start the final race second, Guerrieri was likely to need to finish on the podium if he is to maintain his points lead come the end of the weekend.

Guerrieri launched his Honda well from pole, and moved to the middle of the track on the approach to the first corner to prevent an attack from Benjamin Leuchter's Sebastien Loeb Racing Volkswagen.

Leuchter applied pressure after the intervention of an early safety car and appeared to have more speed that Guerrieri in the final sector, but the superior grunt of the Honda on the main straight meant Guerrieri was safe from attack into Tarzan.

The Argentinian's victory was his first since the season-opening race in Marrakech, and preserved the Munnich team's record of winning at least one race at each round so far in 2019.

Leuchter was just 0.263 seconds shy across the line, and headed an SLR two-three as double World Rallycross champion Johan Kristoffersson scored his first podium since switching to WTCR for 2019.

Dutch driver Nicky Catsburg was fourth in his BRC Racing Hyundai, ahead of Mikel Azcona. The Cupra rookie had been passed at the first corner by Yvan Muller, but regained the place when Muller ran wide through the final corners.

Muller, who had originally qualified on pole for the final race but was stripped of his Q3 time for an overboost issue on his shootout lap, dipped his Lynk & Co's left-front wheel beyond the run-off exiting the penultimate corner and skated through the gravel at Arie Luyendijk before rejoining the track.

He ultimately finished ninth, with Augusto Farfus and Norbert Michelisz (both in BRC Hyundais) plus Muller's nephew Yann Ehrlacher all profiting from that error.

Guerrieri had pipped teammate Nestor Girolami to 10th - and the reversed-grid pole - in the second part of Sunday qualifying, which consigned his compatriot to 11th on the grid for both Sunday races.

While overtaking opportunities were at a premium, Girolami was able to overtake Bjork's Lynk & Co to claim 10th.

Rob Huff (SLR VW) also made it past Bjork, who finished 12th, ahead of reigning champion Gabriele Tarquini, the Comtoyou Cupra of Aurelien Panis and lead Audi representative Jean-Karl Vernay.