The search for performance in Formula 1 requires a little bit of genius, some lateral thinking and sometimes a willingness to push the boundaries of the regulations.

On the odd occasion too, it also helps if you're familiar with the sport's history, as something that was thought lost to the annals of time, might suddenly be en vogue again.

A great example of this is the blown diffuser. These had a huge impact in F1 as the V8 era came to an end, having been used during the 80's and 90's before falling out of favour as the regulations changed.

The original perhaps more crude interpretations had the tailpipe of the exhaust fed right into the diffuser and made life extremely difficult for the driver. 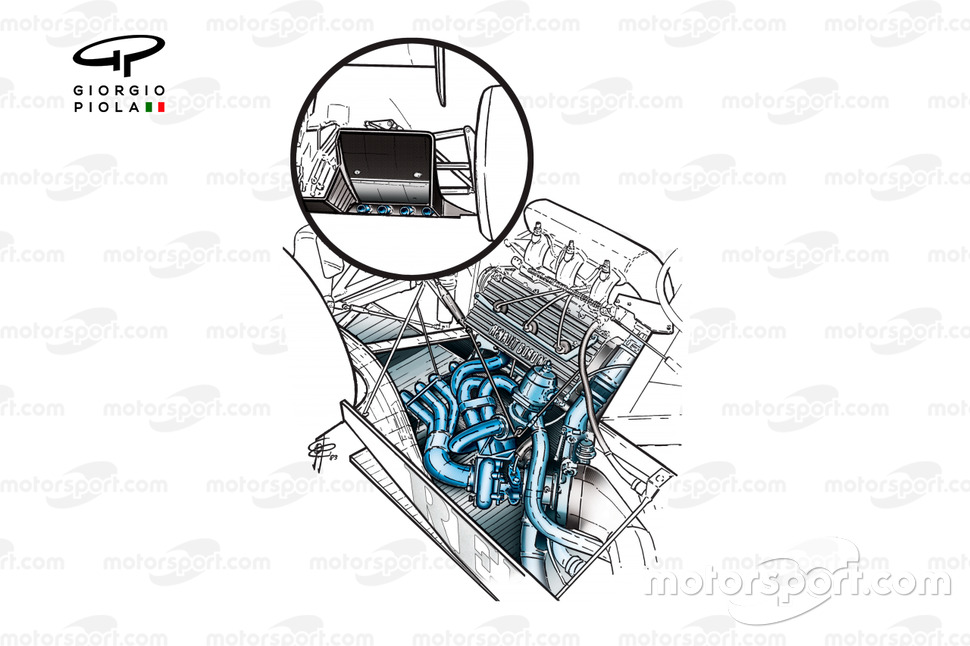 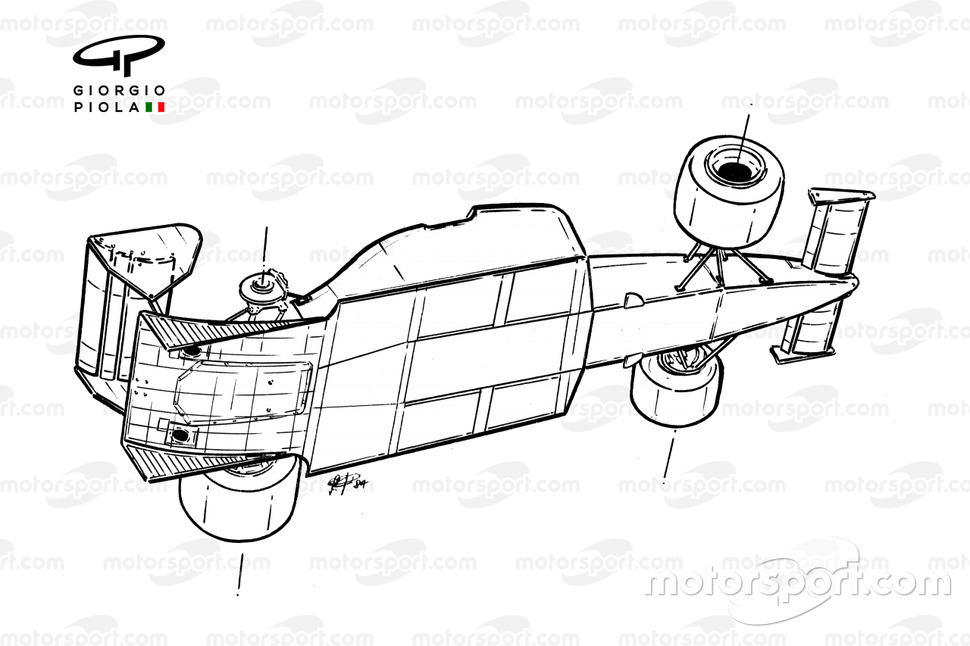 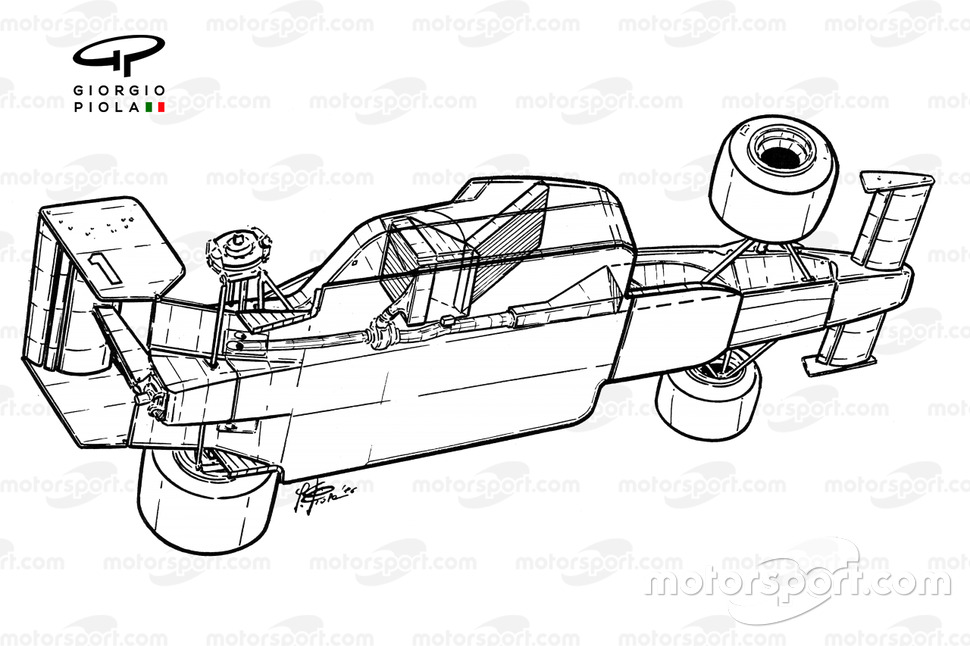 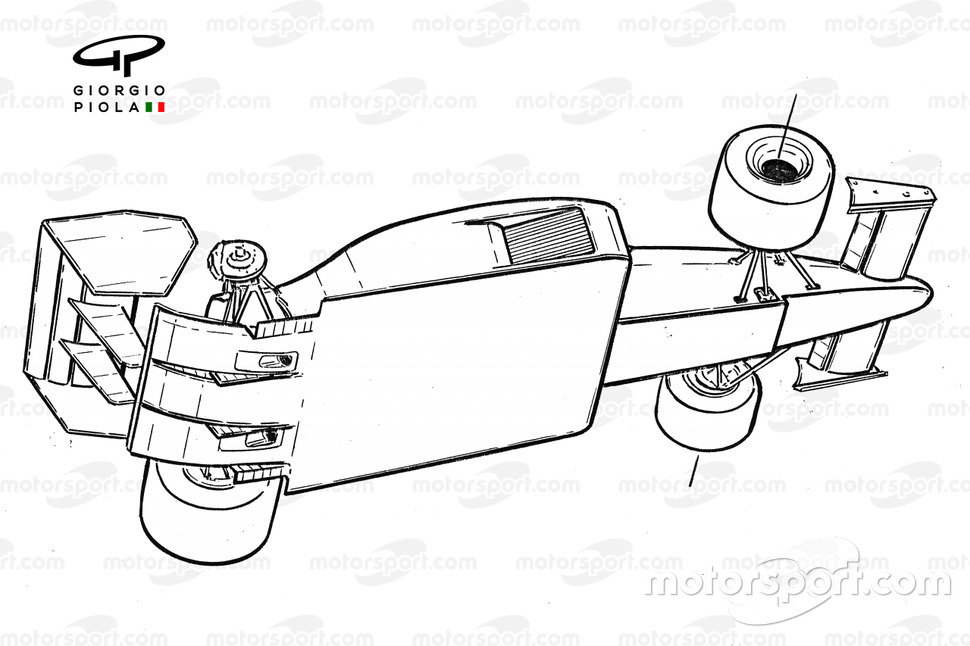 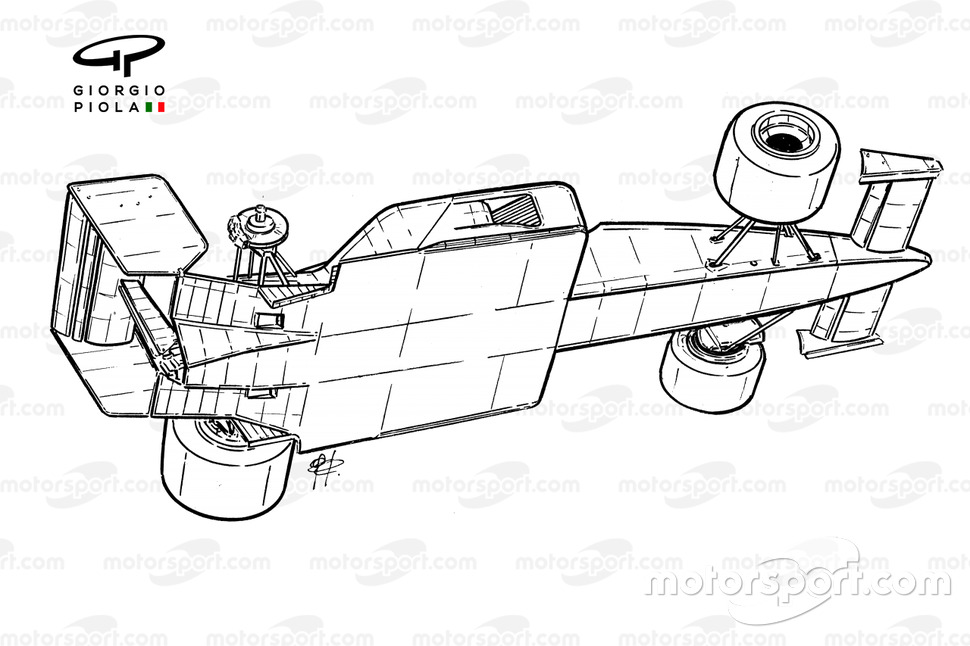 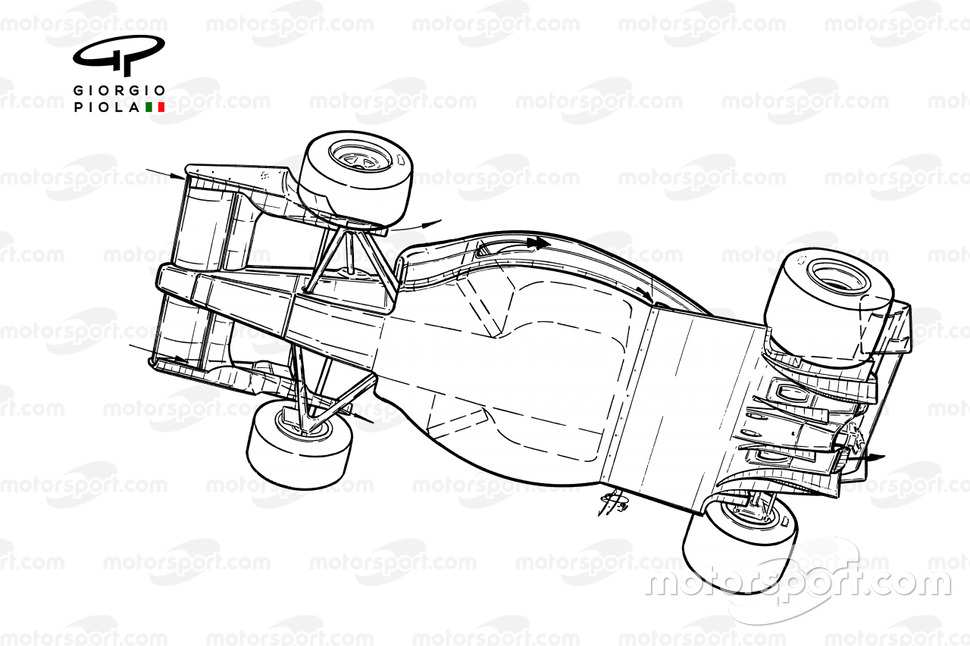 His inputs essentially controlled the amount of downforce available, meaning that many drivers had to try to adapt their driving style to suit – sometimes counter-intuitively getting on and off the power accordingly.

Adrian Newey's RB6 not only featured a double diffuser, a feature that had dominated the development landscape for all of the teams in 2009, but it would also reprise the role exhausts could play in creating downforce at the rear of the car. 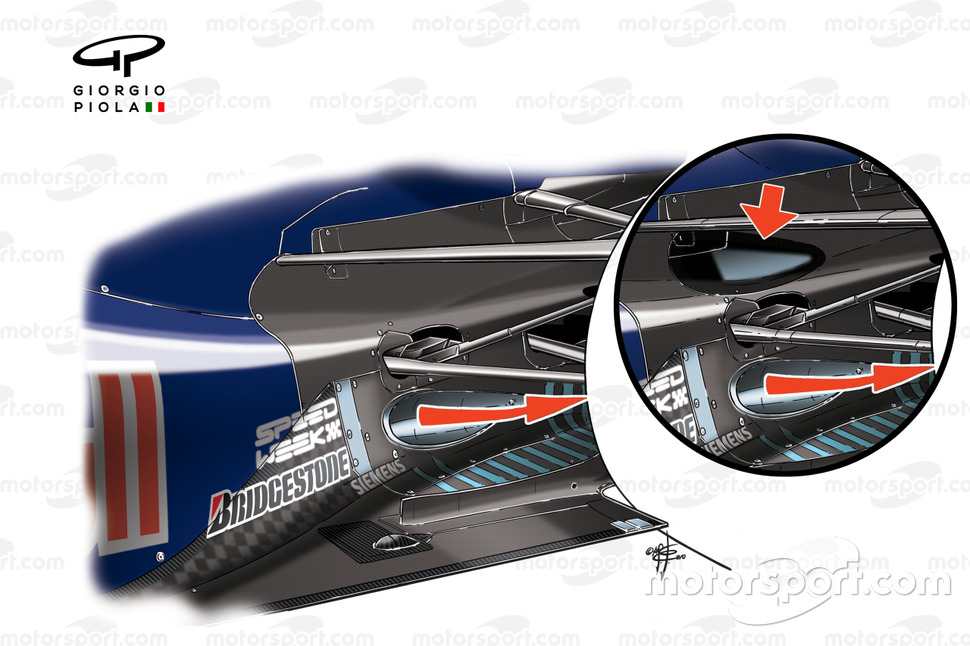 Newey's rebirth of this idea saw the exhaust tailpipes moved down toward the floor, blowing the diffuser from above. The team even attempted to disguise its intentions when it first tested the solution, knowing others would be quick to see its potential, so they placed stickers on the bodywork in the old position (see inset).

As expected, others began to copy the solution as soon as they realized the aerodynamic benefits, of placing their exhaust tailpipe in similar positions. 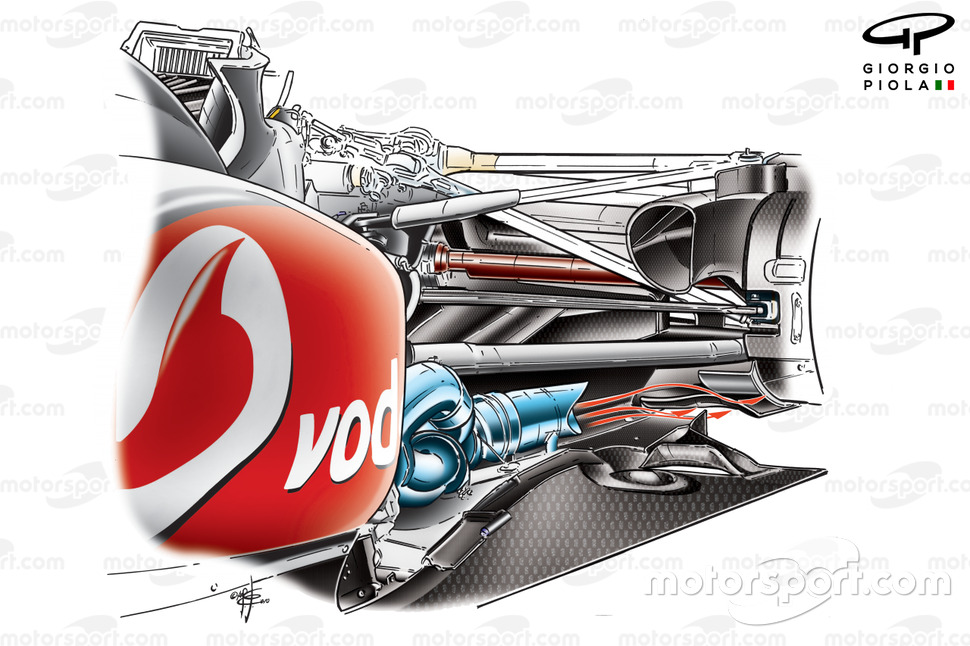 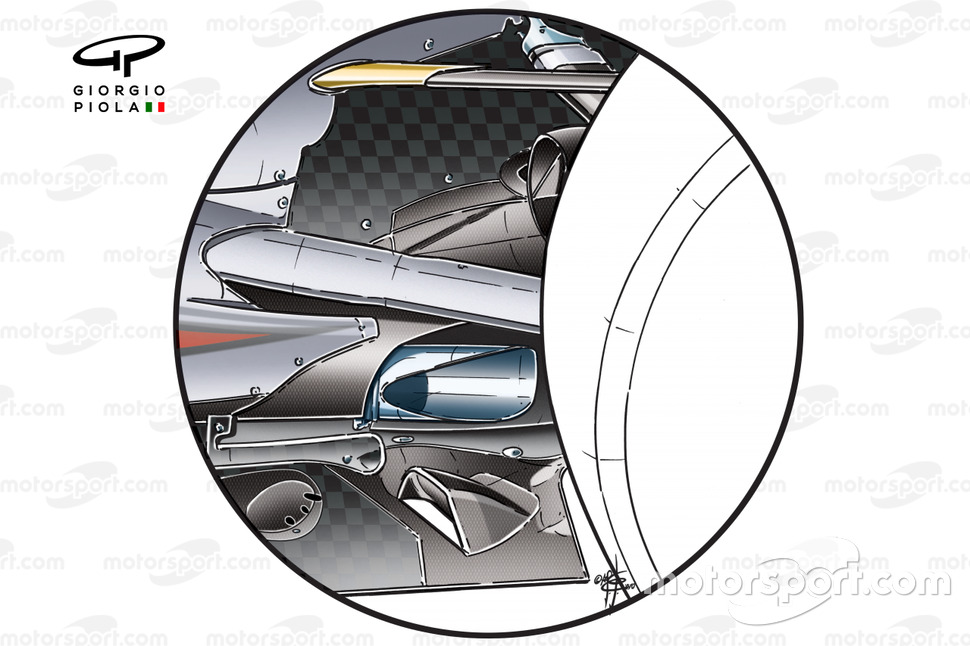 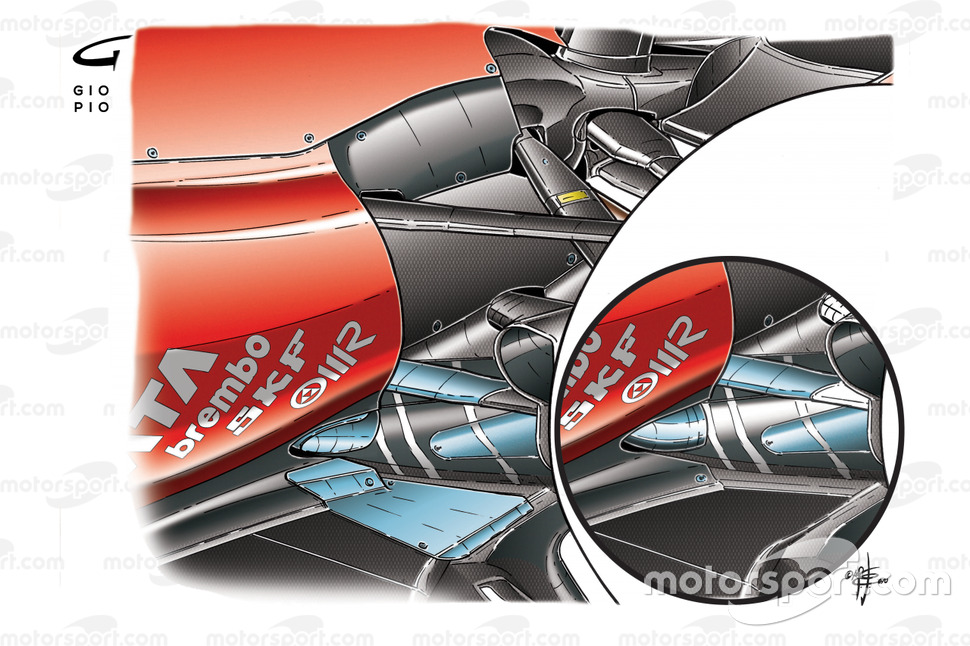 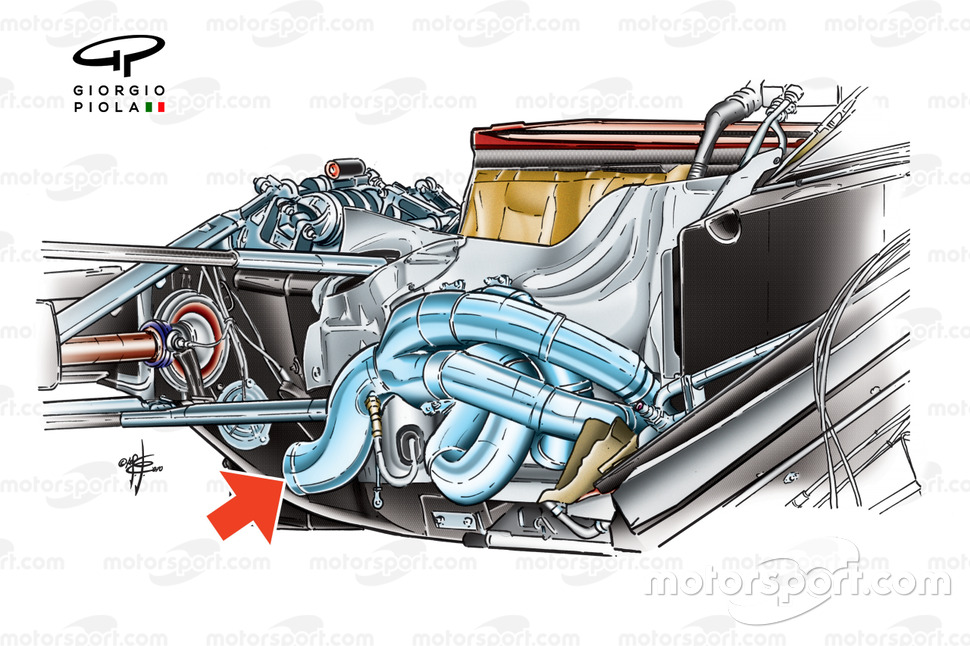 Where Red Bull held an advantage over its competitors though was the head start it had and the work that had been done with engine supplier, Renault, enabling it to extract even more performance through off throttle blowing.

And just like that, the issue with blown diffusers that had existed in the past was being unravelled, as downforce was still being created when the driver was braking and rolling into the apex.

The FIA sought to discourage this practice, moving to change the regulations about the location of the exhaust for 2011.

It failed pretty spectacularly though, as no less than three different designs immediately emerged to try to counteract the new requirements and regain the performance that was initially thought lost. 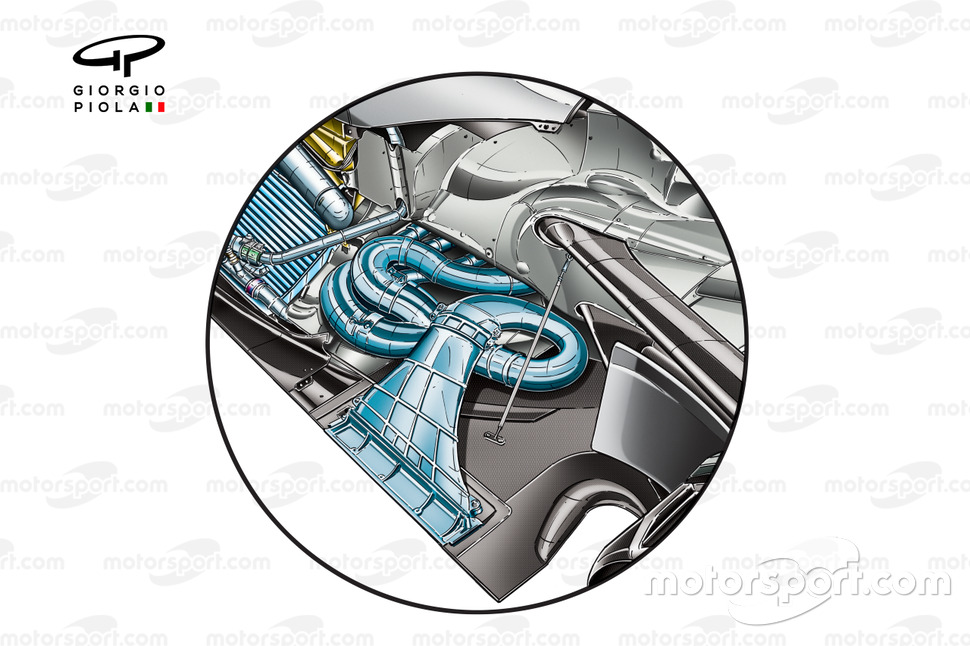 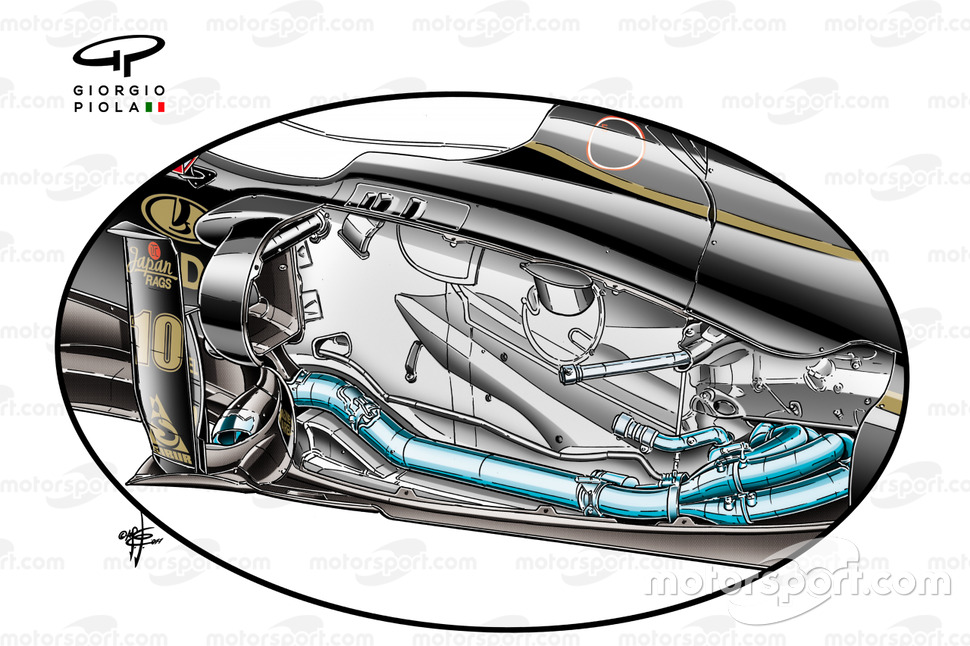 The two most extreme solutions to arrive were from McLaren and Lotus, as they routed the exhaust within the sidepod to try to place the tailpipe in a position where they thought they'd gain the most aerodynamically.

In the case of McLaren, the fantail solution had a nozzle that was mated to the floor and blew through a long slot on its edge. It was supposed to act much in the same way as a skirt, creating a seal between the floor and the track.

Not all good ideas work in the real world though, and this one didn't even make it through testing, as the team struggled with heat management issues and the rigidity of the exhaust vs the flexibility of the floor.

Over at Lotus, it opted to stretch the exhaust outlet all the way to the front of its floor. Its FFE (Forward Facing Exhaust) solution had shown promise when tested against other designs pursued by the team and also proved less susceptible to changes in throttle, resulting in an easier car to drive. 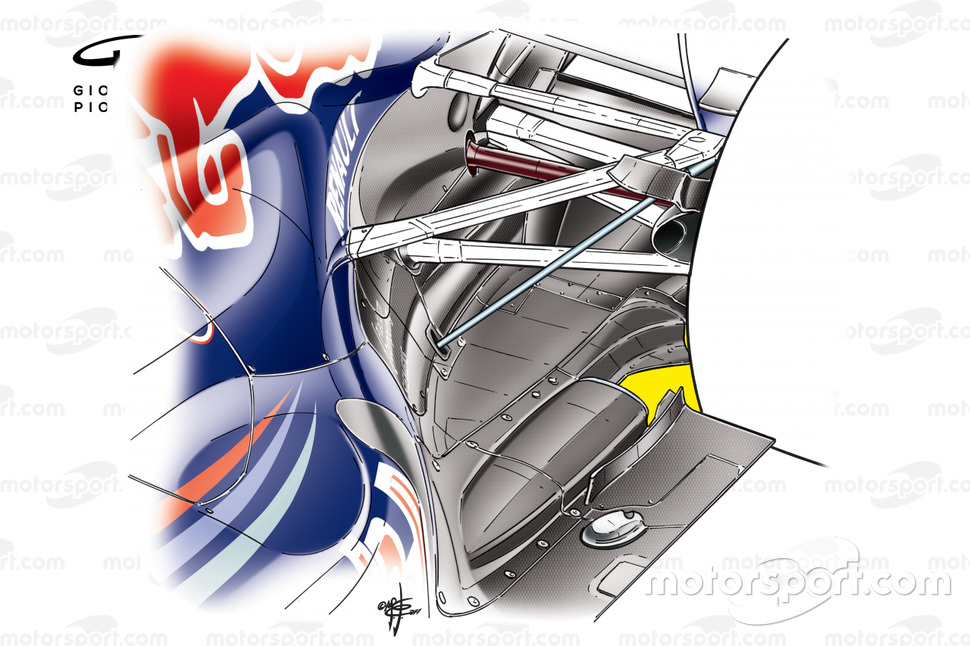 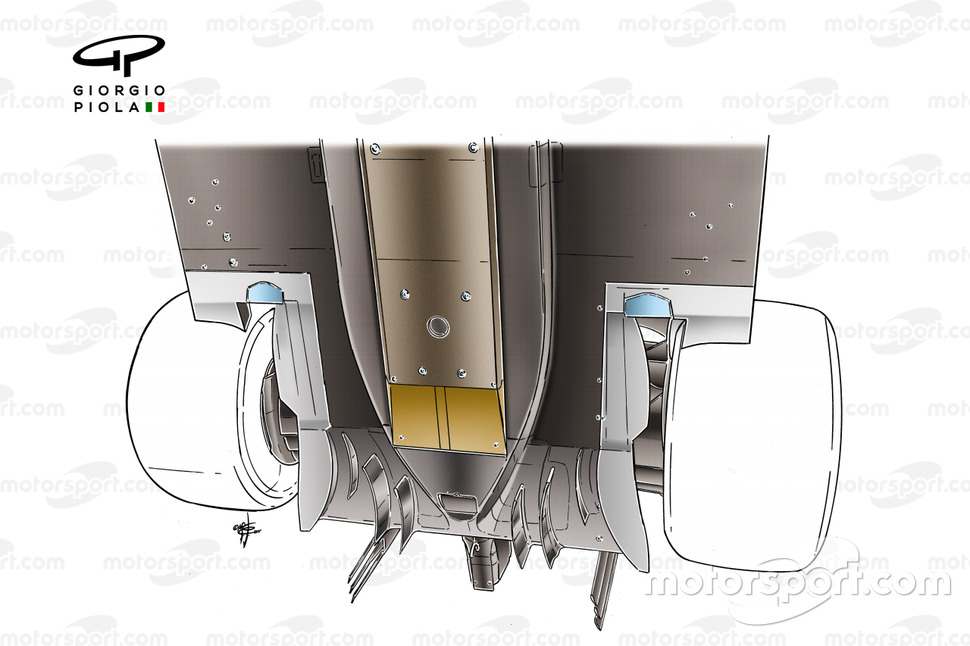 Meanwhile, Red Bull had come up with a less complex design that was swiftly followed by the rest of the grid. It created pancake exhausts that sat on top of the floor and exited into the channel between the side of the tyre and the outer diffuser wall.

This solution would help to mitigate a problem known as 'tyre squirt', which sees jets of air pushed laterally into the diffuser's path as the tyre is squished under load. 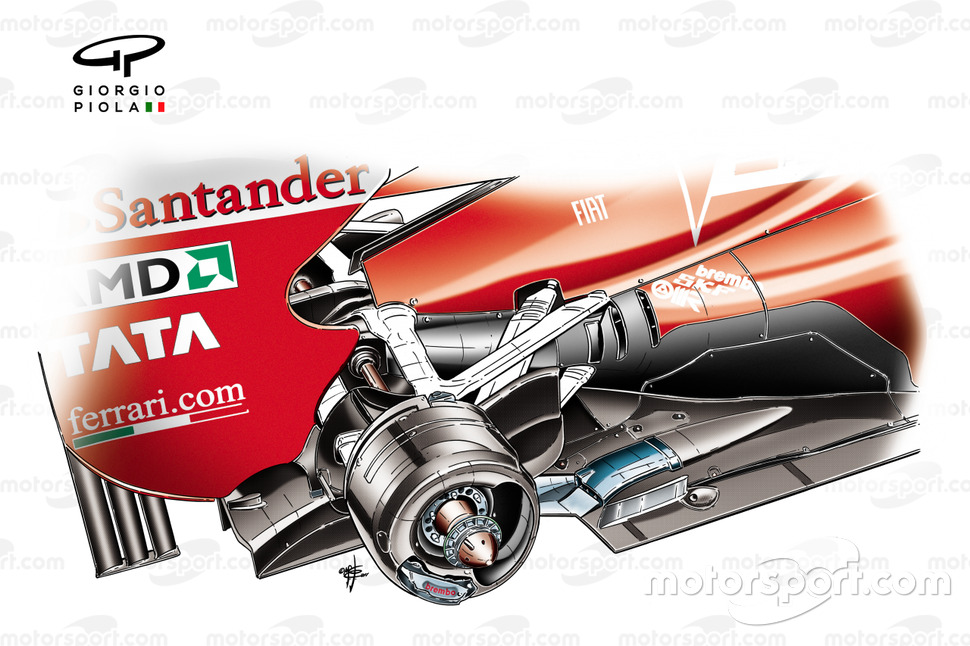 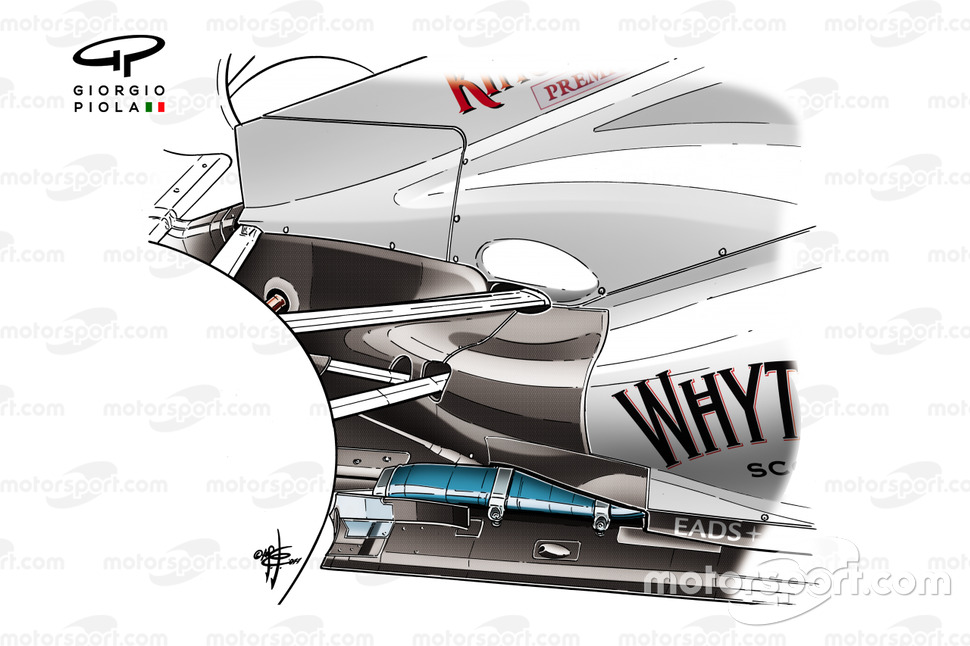 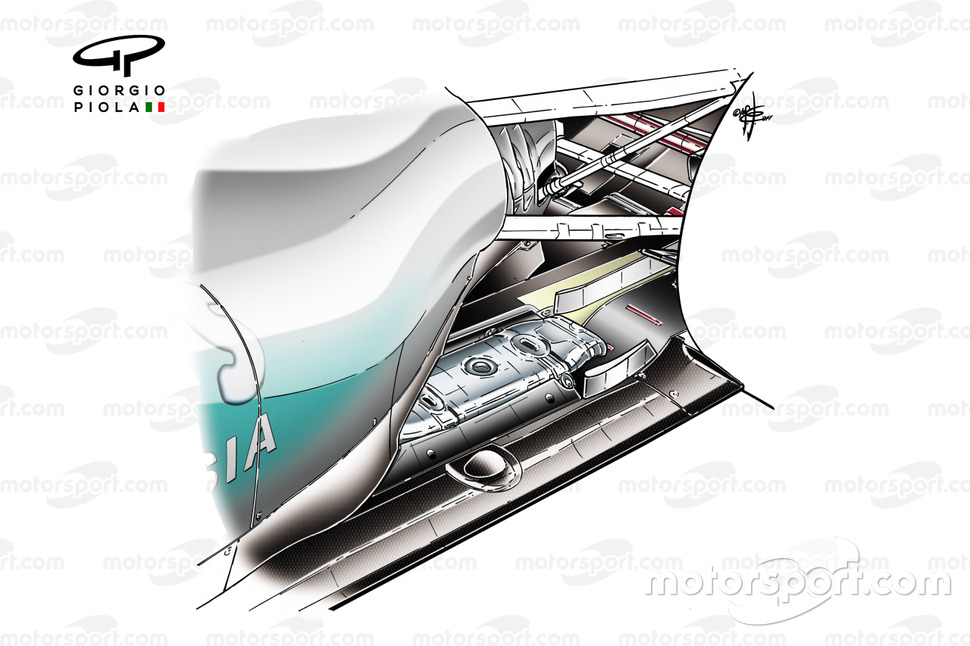 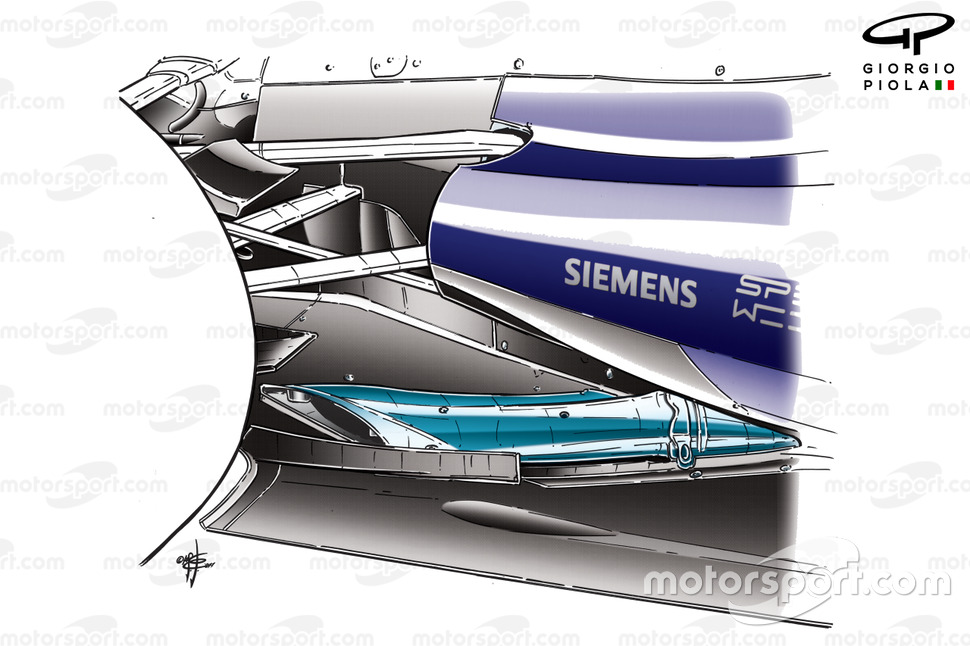 It must not be underestimated just how large a role Renault played in this project. As Red Bull continued to refine and exploit the design of the exhaust, its French power unit partner helped to create engine maps that made the engine act like an air pump when off throttle.

F1 teams and the FIA were once again set to be at loggerheads over the course of the coming races, with the latter unamused that the engine was technically being driven without command from the driver.

It seems that cold blowing, as it became known, was considered a borderline but acceptable tactic by the FIA. This exhaust blowing trick was achieved by cutting fuel and spark and, combined with cylinder cutting to turn the engine (which was still being revved) into an air pump and able to power the diffuser when off throttle.

A practice that subsequently entered circulation was hot blowing. This involved retarding the ignition and messing with the torque maps in order that you'd get a more potent gas plume to power the aerodynamics.

Hot blowing wasn't viable over a long period, as it increased fuel consumption and affected the engine's lifespan. But used sparingly it could offer a tangible performance advantage.

The FIA sought to reign in the practice and was set to introduce an in-season ban on the practice. Following lobbying from the teams, it delayed the ban though and would instead alter the regulations to not only prevent off throttle blowing but also rule out the floor mounted blown diffuser solutions. 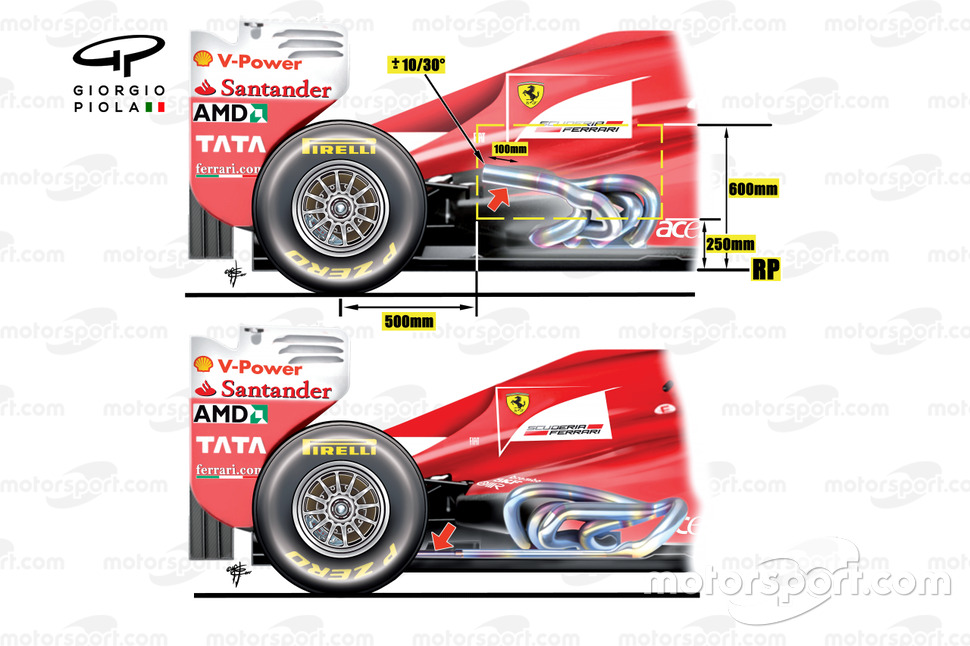 The FIA attempted to stamp out the practice for 2012 by specifying a box region where the exhaust outlet could be placed. It effectively banned the current crop of exhaust blown diffusers but, as we'll find out in the next article in the 'Banned' series, this didn't stop the teams for long...