Ferrari has rubbished suggestions Jenson Button could be set to switch from McLaren. 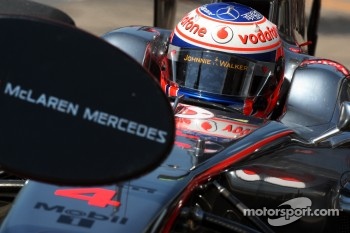 A source at the famous Italian team reportedly told the News of the World this week that Button, 31, was being sounded out as a replacement for Felipe Massa.

"The Brazilian is now well used to this ritual, as it began almost before he set foot in the Scuderia," said Ferrari's anonymous website columnist The Horse Whisperer, referring to near-constant speculation about Massa's future.

The latest names linked to his race cockpit have been Nico Rosberg and now Briton Button.

"It goes without saying that, yet again, this is just a load of twaddle, to use a polite word for what I really mean to say," added the Ferrari columnist.

Indeed, widespread media reports are now saying Button is in fact set to extend his deal with McLaren for 2012 and beyond.

This is just a load of twaddle, to use a polite word for what I really mean to say

The Daily Mirror is the latest publication to reveal that the 2009 world champion is set to agree a new two-year contract with a $3 million per season pay rise.

"The deal has to be finalised before the end of July, but may be announced at the British Grand Prix," said writer Byron Young.

The Mirror report added that German Rosberg, 25, "approached McLaren" about Button's seat but is now expected to stay at Mercedes.