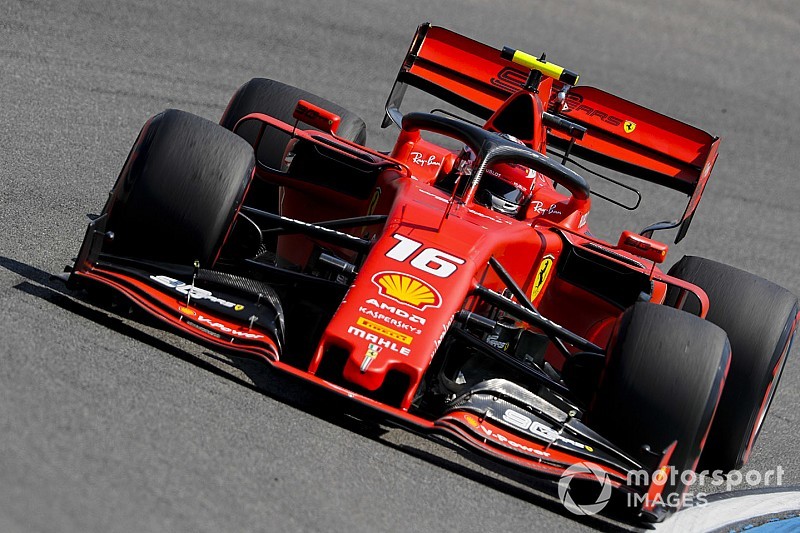 Charles Leclerc edged out his Ferrari teammate Sebastian Vettel as Mercedes came up short on single-lap pace in second practice for the Formula 1 German Grand Prix.

In a session that may well prove redundant if the weather changes as dramatically as expected on Sunday, Hockenheim sweltered in ambient temperatures ranging up to 37C and the surface temperature of the track itself spiked to 51C.

Rapid tyre degradation therefore became an issue as several teams spent the early phase of the session experimenting with shorter runs on tyres at the harder end of the spectrum.

Single-lap pace was proving tricky to unlock since the tyres required delicate management before, during and after any 'push' laps; drivers migrating to the soft tyres later in the session found they had to run up to two achingly slow cool-down laps between faster efforts.

Ferrari went straight back to the top of the timesheets early on as Leclerc - despite a brief complaint about the positioning of his brake pedal - set an initial benchmark of 1m14.523s on the hard-compound Pirellis, eclipsing a 1m14.804s set by Vettel on mediums.

But when the Mercedes emerged, Hamilton displaced them with a 1m14.074s set on mediums, followed by a 1m14.467s for hard-shod Valtteri Bottas.

Red Bull's Max Verstappen also got between the Ferraris during the opening half hour until Vettel bolted on a set of soft tyres and broke through the 1m14 barrier, clocking up a 1m13.573s which was rapidly eclipsed by Leclerc's soft-shod riposte of 1m13.449s.

Verstappen couldn't get as close to the Ferraris when he took on soft rubber, although he reported a power issue that required examination in the pits.

His teammate Pierre Gasly proved unable to summon a properly fast lap from the softs and his best of 1m15.089s left him well outside the top 10.

When Hamilton and Bottas moved on to the softer rubber they fell just short of the Ferraris on their first attempts at 'push' laps, and Hamilton bailed out of a second flier when it became apparent there wouldn't be a decent time at the end of it. Bottas's best was 0.662s off Leclerc's benchmark.

Vettel then went back out on medium tyres for a long run but aborted that after just four timed laps, saying, "We're not learning anything from this."

He then joined the rest of the frontrunners in doing race-simulation runs on the soft rubber; for the majority of the top 10 this entailed circulating at 6s a lap off qualifying pace.

The session was briefly red-flagged with 16 minutes remaining when Gasly looped his Red Bull under acceleration out of the final bend and speared into the barriers hard enough to trigger a deployment of the medical car.

It restarted with nine minutes left on the clock, enough to allow a flurry of track activity that yielded little in the way of laptime improvement since most of the runners bar Vettel were out on medium or hard tyres.

Verstappen ended the session in sixth, two hundredths shy of Bottas, while Romain Grosjean was 'best of the rest' for Haas with a 1m14.179s he set mid-session during a qualifying run on softs.

Nico Hulkenberg was the fastest of the Renault pairing with a 1m14.472s set on soft rubber midway through the session, but he was then left stranded in the pitlane when his car stuck in neutral as he lined up to perform a practice start.

Teammate Daniel Ricciardo had an eventful session, locking up and going off at Turn 2 early on while running on the mediums.

His soft-tyre qualifying simulation of 1m15.010 left him separated from Hulkenberg by Sergio Perez's Racing Point, the McLaren of Carlos Sainz and Daniil Kvyat's Toro Rosso.

Norris says McLaren still needs to step up its game