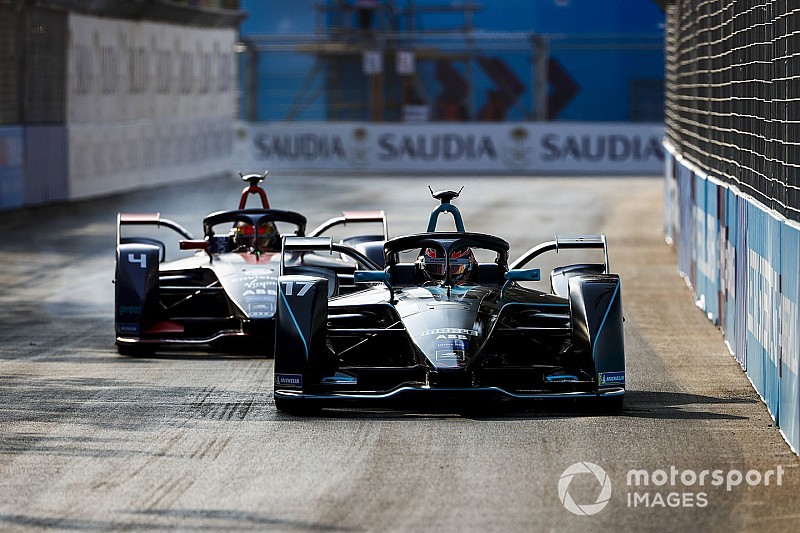 Instead of group qualifying being split into four sets, the drivers will now go out into two 11-driver groups A and B.

Both groups will be allowed to use the track for 15 minutes, but only one 250kW lap per driver is permitted.

The grid will be set by the fastest times from the two groups, with no Super Pole session.

FE group qualifying sessions are supposed to run in championship order for the 2018/19 season, with the drivers at the top of the standings taking to the track in group one.

For this race, the finishing order for the 2017/18 season was to be used, with drivers who have joined the series for season five being added into the order by numeric order of the car numbers.

Qualifying will now take place at 11.25am local time, 35 minutes after it was supposed to get underway on the original event schedule.

FP1 was cancelled due to heavy rain, with an extended FP2 also cancelled as standing water could not be removed from certain areas of the track – Turns 9/10 and Turn 17.

The drivers spent the first five minutes following the safety car before they were released into green flag conditions.

Virgin Racing’s Frijns topped the early times before he was replaced at the head of the order by teammate Bird with a 1m23.445s.

The session was then red-flagged after Mortara crashed at Turn 1, shortly after he lost the rear of his car at Turn 18, which will be the first corner of the race.

A lengthy delay followed, with the clock continuing to run, before the running resumed with just under 10 minutes remaining.

Vergne briefly had a spell as the fastest driver, before he was deposed in quick succession by Bird, Rowland and Evans, who later had a moment at Turn 1, which is situated opposite the pitlane exit.

With just over one minute remaining on the clock, Rosenqvist hit the wall at low speed at the tight Turn 1, crunching the nose of his Mahindra Racing car, with Massa following him off the road.

The Venturi driver did not hit the wall.

A wheel arch from Rosenqvist’s car flew off on the main straight - which is where the start will take place - between Turns 17 and 18, as he returned to the pits.

As that disruption was unfolding, Vandoorne moved to the head of the times on a 1m18.868s.

He stayed there with Bird ending up second ahead of Buemi, Rowland, Evans and Vergne, with Sims, da Costa, Gunther and Abt completing the top 10.

Frijns finished 11th, with Massa and Rosenqvist 19th and 20th.

Mortara did not return to the track after his incident.