Mazda Team Joest moved to the top of the Rolex 24 at Daytona timesheets in second practice, courtesy of a late flyer from Jonathan Bomarito in the #55 Mazda RT24-P. 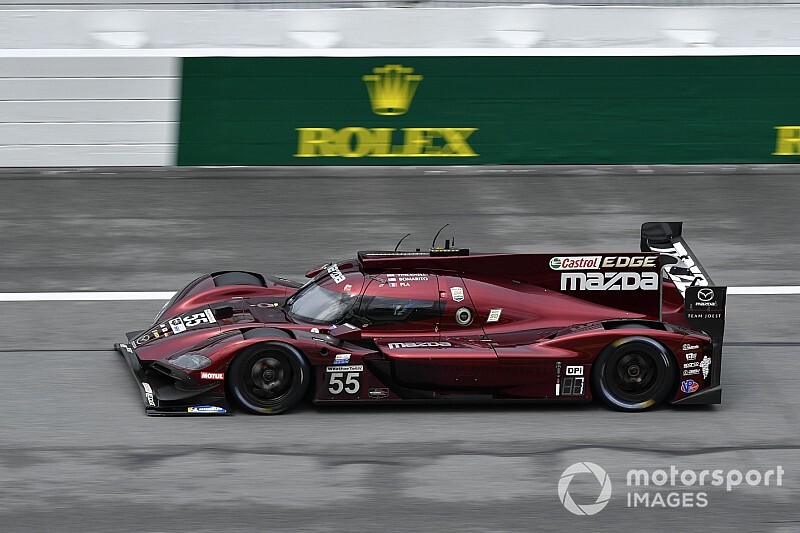 After the opening session of the Rolex 24 weekend was held on a damp track, second practice was dry, albeit with laptimes still some way slower than those set in the Roar test earlier in the month.

CORE autosport's sole Nissan DPi led the session for much of the way after Colin Braun posted a 1m35.338s with 41 minutes remaining, and that wasn't beaten until Filipe Albuquerque set a 1m35.446s in the #5 Action Express Racing Cadillac DPi-V.R with less than 10 minutes on the clock.

But with five minutes left of the session, Bomarito knocked some six tenths off Albuquerque's benchmark with a 1m34.743s, which he followed up with a 1m34.672s on the following lap - putting the #55 Mazda seven tenths up on the competition.

Braun's earlier time was good enough to keep the #54 Nissan third, while Acura Team Penske's Ricky Taylor ensured it was four different makes in the top four with a 1m35.539s effort in the #7 Acura ARX-05.

Fernando Alonso set the #10 Wayne Taylor Racing Cadillac's best time of 1m35.924s to earn P7, one place ahead of the #77 Mazda RT24-P driven by Timo Bernhard.

The LMP2 contingent was headed up by James Allen in the #81 DragonSpeed Oreca-Gibson, the young Australian's 1m37.255s effort putting him three tenths clear of PR1/Mathiasen driver Gabriel Aubry.

Nick Tandy left it late to send the retro-liveried Porsche 911 RSR to the top of the times in GT Le Mans with a best time of 1m43.475s, demoting Corvette driver Jan Magnussen to second by just 0.086s.

Ryan Briscoe was the best of the Ford GT drivers in the #66 machine, taking third place, a further two tenths back, followed by the sole Risi Competizione Ferrari 488 GTE and the second of the Ganassi-run Fords.

BMW propped up the GTLM order with its pair of M8 GTEs managing only eighth and ninth places.

In GT Daytona, Spirit of Race Ferrari driver Daniel Serra was the sole driver to breach the 1m46s barrier with a 1m45.936s, enough to top the class by 0.248s from the leading Meyer Shank Racing Acura NSX driven by Trent Hindman.

Third in class was Ben Keating in the Riley Motorsports Mercedes-AMG GT3, a further 0.060s behind.

Mazda in “completely different stratosphere” at Daytona in 2019