Tandy: Porsche GTLM pole a result of tow from Corvettes 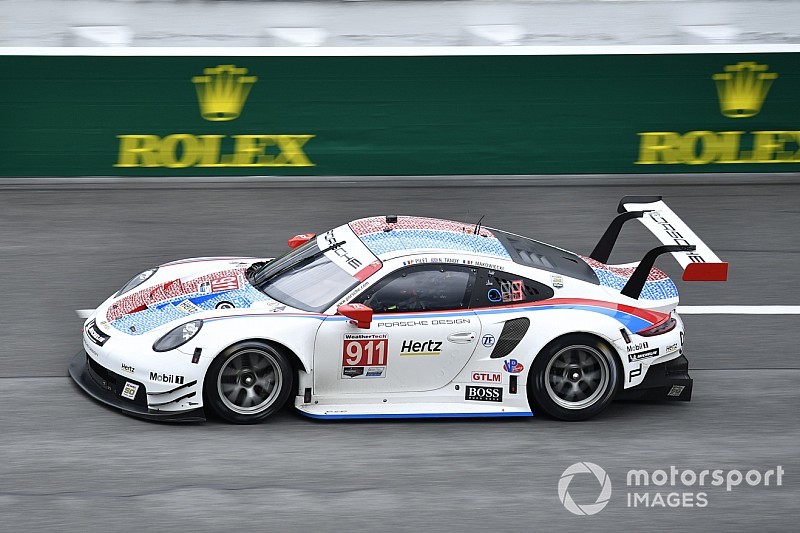 Nick Tandy says the record lap that earned him GT Le Mans pole for this weekend’s Rolex 24 at Daytona was the result of his Porsche 911 RSR towing behind the two Corvettes on the fastest parts of the track.

But the Briton said that Magnussen and fellow Corvette driver Oliver Gavin were partly responsible for his dominant time.

“We had a strategy going into the session,” said Tandy. “We tried to benefit from the slipstream of other cars, and we managed to tag on to the back of the two Corvettes.

“We know with the long straights here at Daytona, a double slipstream is worth a lot of time, probably half a second plus. We managed to time the lap perfectly.

“I had a decent infield section and then the perfect gap coming onto the banking. I actually brushed the wheel on the wall on the exit on [Turn] 6 because I was concentrating so much on getting the tow of the car in front! Through the Bus Stop I was the car in third, and we just all closed up and I managed to pass them at the line.

“It was a perfectly timed lap. The car was good enough to be up there and we were fortunate to be in the right place to bag the pole.”

Asked why the cars get quicker each year, Tandy said that not only have the cars improved, so too have the tires.

The GTLM class universally ran Michelin rubber last year – unlike the rest of the field which only switched from Continentals in 2019 – but even so, Michelin has modified the compound on offer to the faster of the GT classes.

“The cars get quicker every year, of course,” explained Tandy. “Even though they haven’t changed since last year, everybody is optimizing everything with their chassis and systems.

“And we have some new tires from Michelin, which are undoubtedly faster. It’s great to have a track record; it’s also great to drive these cars with new tires and low fuel, because you don’t often get to do that. You might qualify five times a year and do a couple of simulations in a weekend, so it’s fun to have this competitive edge in a session that isn’t a race.”

Tandy remained wary of making any predictions for the race because of the potential for clashes with other cars, and observed that leading the GT cars at the start had pluses and minuses.

“Obviously qualifying for a 24-hour race is very different to qualifying for a sprint race. Of course it’s nice to be at the front, it puts us in a position that should help us stay out of trouble, although when you’re leading the GT pack, you could get caught up in some other things happening in front.

“[But] it’s better to fight to stay where you are than fighting to move forward.

“[However,] we’re under no illusions that the race is very long. Qualifying is one thing, but it’s the last hour [that counts], not the first.”