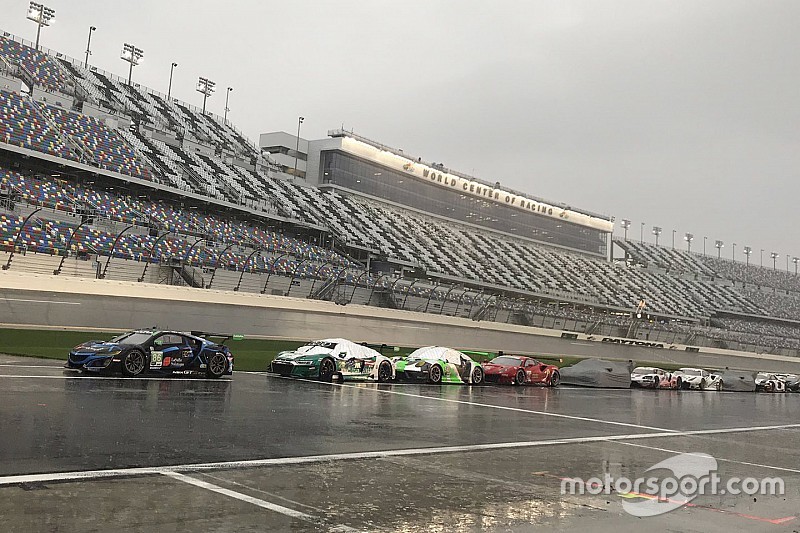 The 57th running of the Rolex 24 at Daytona was red-flagged for more than 90 minutes due to standing water on track, before finally resuming with five-and-a-half hours to go.

The field had been running under caution for more than an hour as marshals tried to clear standing water at the Bus Stop, following a shunt for Tommy Milner's Corvette at Turn 1 in the treacherous conditions, before the red flags were shown at approximately 7.22 local time.

Fernando Alonso led the field behind the safety car in the #10 Wayne Taylor Racing Cadillac DPi-V.R, with the two Acura ARX-05s of Dane Cameron and Ricky Taylor as well as the #31 Action Express Cadillac of Pipo Derani the only other cars still on the lead lap. AXR pitted Derani shortly before the red flags flew without penalty.

"Conditions are quite bad, now it's raining heavier," Alonso told NBCSN. "For me it's ok, the visibility is ok, but if you are running fifth or sixth onwards the visibility will be a problem, and the aquaplaning.

"It's difficult to fix, now it's raining heavier. Let's see. As long as we are doing laps behind the safety car, it looked bad for the spectators, so it's better to stop and when the conditions are better let's go racing."

The CORE autosport Nissan DPi completes the top five, four laps down on the lead with Colin Braun at the wheel.

LMP2 is led by the #81 DragonSpeed Oreca of James Allen by a lap over the sister car of Pastor Maldonado.

Six cars remain on the lead lap in GT Le Mans, with the #62 Risi Competizione Ferrari 488 GTE of Alessandro Pier Guidi heading the field ahead of the #912 Porsche 911 RSR (Laurens Vanthoor) and the #66 Ford GT (Joey Hand).

GT Daytona is led by the #86 Meyer Shank Racing Acura NSX with AJ Allmendinger at the wheel following a pitstop for the #33 Riley Motorsports Mercedes-AMG GT3, with Dries Vanthoor second in the Land Motorsport Audi R8 LMS.

At 8.35 local time, IMSA announced it would aim to restart the race at 9.00 (14.00 GMT), and cars rolled off pitlane under caution on schedule. Green flag racing finally resumed at 9.07 with 522 laps complete.

But a 12th caution was immediately called after a multi-car incident on the frontstretch involving three GTD cars, the #9 Pfaff Motorsports Porsche 911 GT3-R, the #46 Ebimotors Lamborghini Huracan GT3 and the #48 Paul Miller Racing Lamborghini.