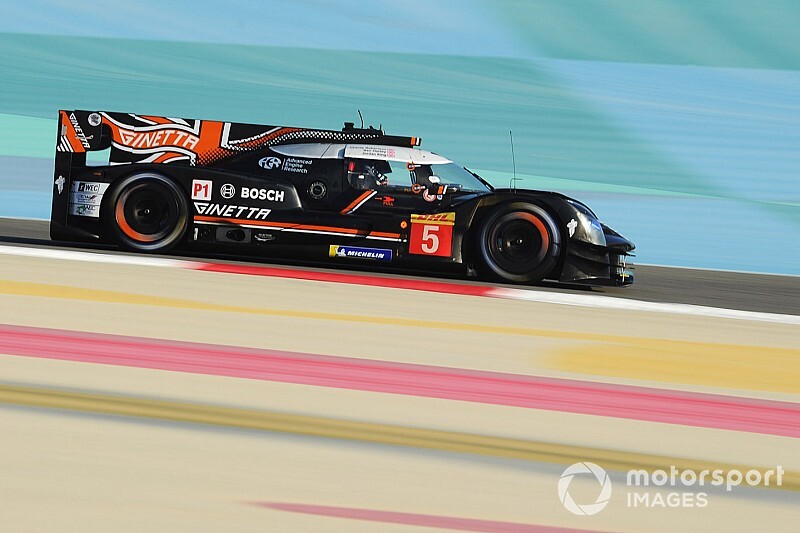 Ginetta dominated the first practice for the Bahrain round of FIA World Endurance Championship, leading its closest LMP1 rival Rebellion by over two seconds.

However, with no late improvements late in the session, that time was enough for Hanley, Jordan King and Charlie Robertson to stay quickest, 2.185s ahead of the sole Rebellion R-13 of Bruno Senna, Norman Nato and Gustavo Menezes.

After trailing the Toyotas, Nato moved the Rebellion to second halfway through the session, lapping the circuit in 1m46.976s.

Toyota ended the session as the slowest of the three LMP1 outfits, with the #8 car of Kazuki Nakajima, Brendon Hartley and Sebastien Buemi leading the sister #7 machine of Kamui Kobayashi, Mike Conway and Jose Maria Lopez.

The #6 Ginetta, the only LMP1 car to run without a handicap this weekend, sat behind the leading LMP2 cars after completing just six laps early on.

But a late stint by newcomer Chris Dyson moved the car he shares with Guy Smith and Michael Simpson up to fifth overall, 3.2s down on the pace-setting Ginetta.

G-Drive Racing's one-off entry was more than two seconds off the pace and eighth in class in the hands of Roman Rusinov.

Porsche led a 1-2 in the GTE Pro category, with the #91 car of Richard Lietz and Gianmaria Bruni leading the way for the German manufacturer thanks to Bruni's time of 1m57.388s.

Michael Christensen finished 0.037s down in the #92 911 RSR-19 that leads the championship heading into the 8 Hours of Bahrain.

Ferrari finished as Porsche’s closest rival in FP1, with the #71 488 GTE of Miguel Molina finishing another 0.012s adrift in third ahead of the #51 of James Calado.

The GTE Am category was topped by the championship-leading TF Sport Aston Martin Vantage GTE of Jonathan Adam.

A full course yellow was briefly deployed with 30 minutes left on the clock when a bollard was knocked off, and required intervention from track marshals.