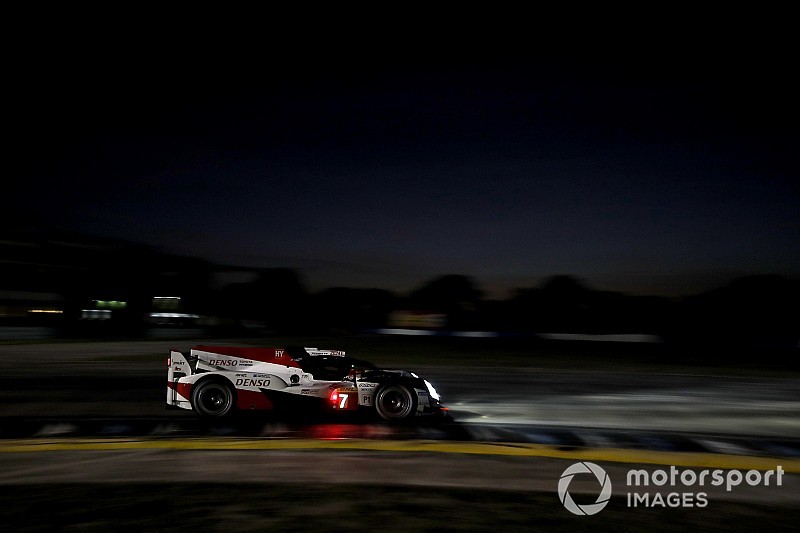 Jose Maria Lopez put the #7 Toyota TS050 Hybrid ahead with an early best lap of 1m41.730s, going marginally quicker than Kazuki Nakajima had managed in first practice earlier in the day.

The Argentine's time would remain untroubled for the remainder of the 90-minute session.

Nakajima was again the quickest of the #8 Toyota drivers, but his best effort of 1m42.517s, which came around the halfway mark, was 0.787s adrift.

There was some late drama for the #8 crew when Fernando Alonso suffered a spin at Turn 1, albeit without consequences.

SMP Racing reversed the non-hybrid LMP1 pecking order from FP1 with the third and fourth-fastest times for its pair of AER-powered BR Engineering BR1s.

Stephane Sarrazin posted a marginally quicker time in the #17 car, 1.279s off the pace and exactly one hundredth up on SMP newcomer Brendon Hartley in the #11 machine.

Thomas Laurent headed the Rebellion Racing charge in fifth place, ahead of Bruno Senna in the second Rebellion R13-Gibson and Ben Hanley in the DragonSpeed BR1.

Jackie Chan DC Racing led the way in the LMP2 class courtesy of a 1m47.716s effort from Stephane Richelmi at the wheel of the #37 Oreca 07.

That was enough to beat Nicolas Lapierre in the #36 Signatech Alpine Oreca by just under half a second.

The DragonSpeed Oreca caused an early full-course yellow when it shed its left-rear wheel while Anthony Davidson was aboard, although the American squad was able to return to the track after a delay of almost an hour.

Ford occupied the next two spots in class, as Harry Tincknell's time in the #67 fell just short 0.033s short of Lynn's but eclipsed teammate Stefan Mucke's by a tenth.

The best of the Ferrari 488 GTEs, the #51 car, was fifth, behind the #95 Aston Martin, while Porsche's top representative was the points-leading #92 car in sixth.

Ben Barker put in a late flyer of 1m59.327s to move the Gulf Racing Porsche squad to the top of the times in GTE Am, a little under a tenth up on Giancarlo Fisichella's Spirit of Race Ferrari.

Project 1 Racing, which didn't take part in FP1 as it built up the spare chassis that arrived at Sebring on Wednesday morning, completed 27 laps and ended up eighth of the nine runners in class.