Toyota driver Jose Maria Lopez set the fastest time of the weekend so far in final practice for the Sebring 1000 Miles FIA World Endurance Championship round. 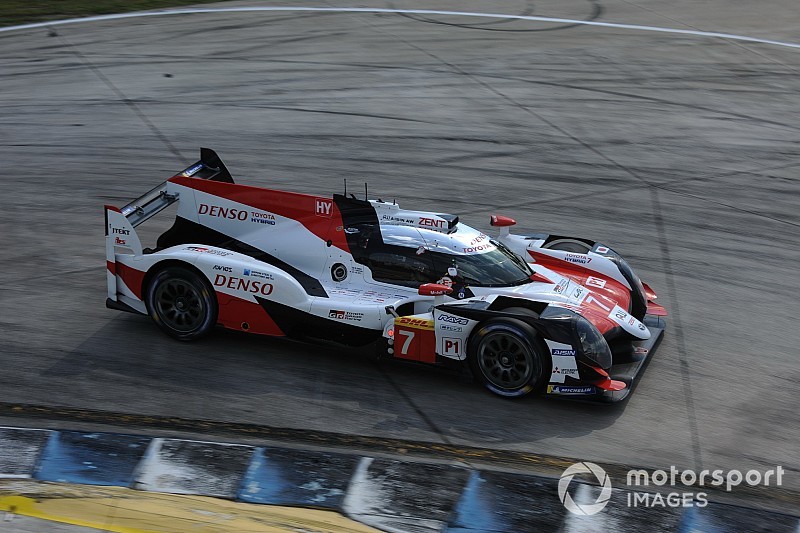 After taking over the #7 TS050 Hybrid from Mike Conway, Lopez posted a best time of 1m41.448s in the 60-minute session, eclipsing his own best time set in Wednesday evening's second practice.

Fernando Alonso set the best time in the #8 Toyota, a 1m42.101s - 0.653s adrift of Lopez - as both Toyotas stretched their advantage over the non-hybrid LMP1 runners.

Best of the rest was DragonSpeed's Gibson-powered BR Engineering BR1 of Renger van der Zande, albeit the Dutchman's best time was 2.7s off the pace.

Rebellion Racing's two R13-Gibsons were fourth and fifth, with Neel Jani in the #1 managing a time a little more than a tenth quicker than Gustavo Menezes in the #3.

Both SMP Racing BR1s were some five seconds slower than the Toyotas, with Vitaly Petrov's best lap putting the #11 car ahead of the #17 machine of Egor Orudzhev.

Gabriel Aubry, who is on double WEC/IMSA duty this weekend at Sebring, recorded the best time in the LMP2 class in the #38 Jackie Chan DC Racing Oreca.

The Frenchman's late 1m48.353s effort was enough to eclipse Nicolas Lapierre in the #36 Signatech Alpine Oreca by 0.141s.

GTE Pro was led by Ford courtesy of a 1m57.730s effort from Andy Priaulx in the #67 car, slightly quicker than the class benchmark from Wednesday evening.

Porsche's pair of 911 RSRs filled the next two spots, Michael Christensen in the #92 narrowly shading Gianmaria Bruni in the #91 car, while Alessandro Pier Guidi put the best of the Ferrari 488 GTEs in fourth.

Aston Martin, which topped FP2, propped up the GTE Pro times in 10th and 11th, behind the sole Corvette Racing C7.R in ninth place.

The pacesetter in GTE Am and fifth-quickest of the GTE cars generally was Matt Campbell in the #77 Dempsey-Proton Racing Porsche, the Australian going seven tenths clear of the field.

Paul Dalla Lana prompted a full-course yellow period when he spun the #98 Aston Martin Vantage at Turn 17 a little over half an hour into the session and hit the tyre barriers backwards.