Jyväskylä, 29thJuly, 2011. Day two of Neste Oil Rally Finland was successful for the MINI WRC Team with the drivers, as planned, gaining valuable knowledge of the MINI John Cooper Works WRCs and bringing them to the overnight halt in Jyväskylä without a scratch on either of them. Dani Sordo (ES) and Carlos del Barrio (ES) were seventh in the number 37 car, and Kris Meeke (GB) and Paul Nagle (IR) were eighth in the number 52 sister car after over 170 kilometres of competitive driving since the start.

For Meeke there was one small problem when he was about to start stage eight. He had stopped just before the stage, but when he went to fire up the MINI it would not start. The delay in starting it cost him two minutes, and this translated into a 20 second penalty. Meanwhile for Sordo it was an overshoot at the first junction on stage 11 that lost him some time, but he was soon back in the right direction despite losing ten seconds to Meeke over the 12 kilometres.

Tomorrow is the last day of the rally. There are another six stages with the first one starting at 07.58 and the final one, which is the power stage, at 19.11. There are still another 140 kilometres of competitive mileage left in the overall total of 314 kilometres. 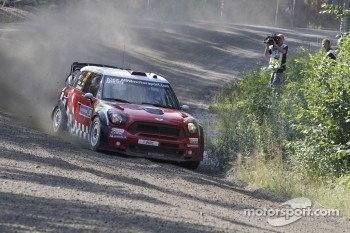 “Today we are particularly pleased with Kris, who is driving very well. His plan is just to learn the roads, get through the rally and go home with experience. He is over achieving above our expectations, and driving within himself and taking no risks. We had a small problem when his car would not start, and so he booked in two minutes late. It seems to have cured itself, but then problems are never isolated, so we need to have a good look at that. Dani is driving well, but nobody knows these stages from today. He is happy with the car, the tyre wear seems to be good, but on the stages he knows tomorrow we are expecting him to go well and up the performance to show what the car can do.”

“It was not bad, but we are waiting for a little bit more – not from the car but from me to be a little bit faster and more confident. It is always very difficult here in Finland, and then we had all the new stages today. We also made a mistake on the last stage and had a spin after missing the braking on the first junction. However, I had a lot of fun and did well in stage ten where two cars start side by side and so have a race to the finish. ”

“It has been going pretty well. I probably have not been trying much harder than yesterday, but the more you get back into rally speed the more you get a feel for these roads and the more it just comes to you. On the long stages we are about half a second a kilometer behind the likes of Sebastien Loeb and Sebastien Ogier, which I think in this territory is pretty good. It shows we still have a bit of work to do, with both the driver and the car. I can’t complain for my first full rally back in ten months, and it is nice to have got really good mileage in over the last couple of days and we have another day tomorrow. ”

The MINI WRC Team is proud of being associated with premium brands, so its sponsorship from BP Ultimate fuels fits perfectly into this category. As the two MINI John Cooper Works WRCs compete on day two of Neste Oil Rally Finland, the distinctive logos can be seen prominently displayed above the front wheel arches of car number 37 driven by Dani Sordo (ES) and Carlos del Barrio (ES) and number 52 driven by Kris Meeke (GB) and Paul Nagle (IR).

“BP is delighted to sponsor the MINI WRC Team and is looking forward to the remaining rallies in 2011, and the full slate of rallies in 2012,” said Michael Ulmer, BP Global Account Manager MINI.

Loeb Stuck With Lead As Tactics Play In Rally Finland