Sherco TVS rider Aravind KP became only the second Indian to finish the Dakar Rally after crossing the finishing line at the end of stage 10 on Thursday.

Following unsuccessful attempts in 2017 and ‘18, KP returned to Dakar this year for a third assault and gradually upped his pace, breaking inside the top 50 when the action resumed after a mid-rally break on Sunday.

He set the 42nd quickest time in the final 86 km special that ran from Lima to Pisco in Peru to eventually finish 37th in the overall classifications. However, that ranking remains provisional at present as organiser ASO applies potential post-rally penalties to different riders.

With that result, KP successfully followed in the footstep of CS Santosh, who finished the Dakar on his first attempt in 2015 astride a customer KTM bike.

Santosh was also competing in the 2018 edition of the event as a factory rider for Hero MotoSports team, but was forced to retire in stage 5 after suffering a crash that left him briefly unconscious. 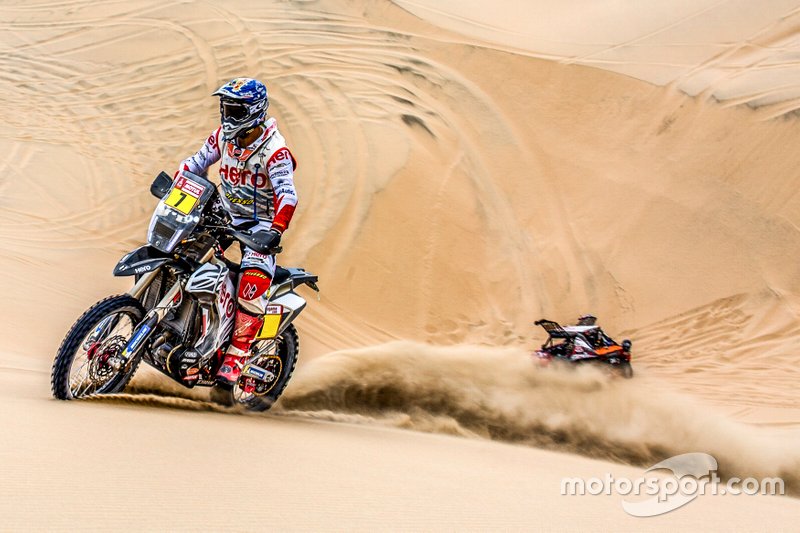 Mena was classified ninth in the provisional rankings, bagging a second successive top 10 finish for the Indian team.

Rodrigues was hit by multiple issues in the first half of the rally that dropped him outside the top 30, but he staged a remarkable recovery in the final stages to finish 17th in the provisional classifications.

Like Hero, Sherco TVS also lost one of its riders in Dakar, with Lorenzo Santolino forced to retire from the event due to a crash of his own while running on the cusp of top 10.

That made things tricky for the Indo-French team, particularly because Michael Metge had lost hours of time in stage 2 with a fuel outage.

However, Metge gradually clawed back time, remarkably winning the penultimate stage. Unfortunately, he hit trouble in the final stage and was classified 25th in the provisional ranking.

Note: All results are provisional at present and subject to change