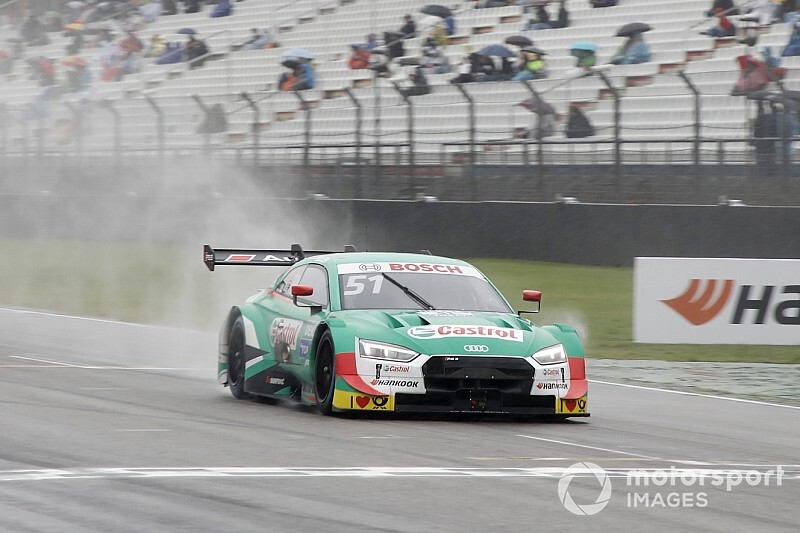 Nico Muller ended the DTM season with victory in torrential conditions at Hockenheim after bizarre early scenes that included an Aston Martin catching fire and a SUPER GT car crashing.

Muller held onto his lead at the start and was given an immediate boost as a five-car battle for second place instantly erupted between the fast-starters of Mike Rockenfeller and Marco Wittmann, as well as Rene Rast, Jamie Green and Timo Glock.

But the duel came to an end almost instantly when the R-Motorsport Aston Martin of Daniel Juncadella pulled off the track and the safety team was called to put out the fire under red-flag conditions.

That came after Paul di Resta retired on the formation lap due to an engine problem during a weekend in which R-Motorsport has been blighted by reliability problems.

Just before the red flag, Nick Cassidy had a spin into the wall through the Turns 7-9 complex after lightly tagging the outside of WRT Audi's Jonathan Aberdein.

Cassidy had previously crashed the TOM'S Lexus during Friday's practice, limiting his track time as SUPER GT acclimatises to the DTM's format.

Once the race resumed, Muller held onto his lead but came under fire from Rast - the victor of the earlier five-car battle - and the 2019 DTM champion took the lead from his former title rival after Muller initially defended resolutely at the hairpin.

Muller opted to make his mandatory pitstop on the sixth lap of 27 and Rast followed a lap later, with the Audi Rosberg driver enjoying a quicker pitstop.

Rast held the lead but lost it shortly after when the two-time DTM champion ran wide on the exit of the Turn 10 right-hander, allowing Muller past to cruise to victory.

Muller's status as winner took until the final lap to be confirmed as Audi's Jamie Green and BMW's Joel Eriksson ran until the penultimate lap before making his pitstop.

Rast would not finish second, however, as Rockenfeller had passed his Audi stablemate not long after Muller's eventual race-winning move.

BMW's Glock managed to hold off Green once the Audi driver returned to the track to take fourth, with Eriksson's identical strategy leaving him sixth.

Robin Frijns placed his Abt Audi in seventh ahead of the highest-placed Aston Martin of Jake Dennis as Bruno Spengler and Loic Duval rounded out the top 10.

Wittmann had looked set to challenge for a podium finish but an unsafe release earned him a drive through penalty that meant he could only finish 12th.

His stablemate Philipp Eng and WRT Audi's Pietro Fittipaldi also earned drive-through penalties, but their offences were for failing to respect the three-minute rule under red flag conditions, which related to the tyres being fitted and the cars not being on their jacks three minutes before a race restart.

Formula 1 world champion Jenson Button had warned on Saturday that wet conditions would not suit the SUPER GT cars. His prediction proved accurate, as he finished a muted 16th place, but his Honda crew did significantly improve their pitstop after Saturday's delay.

The NISMO-run Nissan of Ronnie Quintarelli was 17th, having made a stop under the early safety car which meant he had to make a mandatory stop later in the race.