Nick Heidfeld has admitted he gave up his only shot at Grand Prix victory some years ago because he respected a team order.

The old team orders debate resurfaced after Mark Webber refused to back away from his Red Bull teammate Sebastian Vettel in the closing stages of the British Grand Prix. 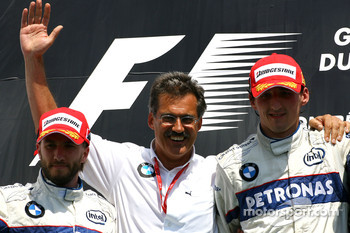 But Heidfeld, still chasing his first win at the age of 34 and with approaching 200 Grands Prix under his belt, told Der Spiegel at the Nurburgring that he gave up a win at Montreal for his then BMW teammate Robert Kubica in 2008.

"I know I can win," he said. "I once had victory in sight and gave it up for the sake of my team.

"In Canada I was leading and in front of Robert, who was on a different strategy where he had to stop again for new tyres. I did not.

"So that he could use his strategy I let him pass -- the team had calculated that they would either get first place for me and fourth for Robert, or if I helped then a one-two."

Interviewer Ralf Bach asked Heidfeld if he regrets his decision.

"Put it this way: if I ended my career without winning a race, then yes. I also know that some drivers have ignored the requests of their teams.

"But I'm not just a Formula One driver but also a member of a team, and you can't forget that," he said. "It's unfortunate sometimes but that's the way it is."

Oddly for Heidfeld, he is now occupying Kubica's Renault race seat, hoping on the one hand that the Pole recovers from his injuries and on the other pushing to stay at the team for 2012.

"I'm trying everything possible to stay," he said. "It is my clear goal."