The Williams F1 BMW FW26 is the second step change carried out by the WilliamsF1 design team in two years. Chief Designer Gavin Fisher explains why. While the WilliamsF1 BMW FW25 was stock piling silverware on the racetrack, its architects were ...

The Williams F1 BMW FW26 is the second step change carried out by the WilliamsF1 design team in two years. Chief Designer Gavin Fisher explains why.

While the WilliamsF1 BMW FW25 was stock piling silverware on the racetrack, its architects were busying themselves with its replacement, the FW26. "The FW26 is not an iteration of its predecessor, which might surprise some people given the former car's relative success", says Chief Designer, Gavin Fisher. But explaining the design approach to the new car, Fisher continues, "You cannot stand still or relax your development pace for a single minute in Formula One." 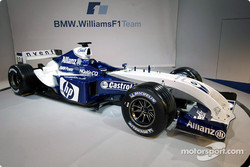 The new WilliamsF1 BMW FW26.
Photo by Sutton Motorsport Images.
When pressed to define the FW26, Fisher confesses a dislike for the use of the term 'radical', "It is devalued because it is over-used", he reflects, "And to a large extent the possibility is excluded by the restrictive technical regulations that govern Formula One. That said, it will be immediately evident to onlookers that a high degree of innovative design has gone into the FW26". Not so much an iteration, but a step change, and as such, the second carried out by the WilliamsF1 design team in as many seasons.

In the hothouse design environment, the demands on individuals have been high, caused not only by the magnitude of the changes relative to FW25, but also from the intended earlier launch date. "We were conscious that the inability to extract the full potential of the FW25 until well into the season was a significant contribution to our failure to win either Championship. The earlier launch date for FW26 is a clear statement of our intent to be in a position to win from the first race onwards."

The challenges of a fundamentally ground-up design process are multiplex. Routine design improvement processes involve isolating sub-optimal performing elements of a race car, and iterating -- or improving -- the design from the original position. But the FW26 borrows little from its predecessor, and as a consequence, every element, no matter how ancillary, must be designed from scratch.

The WilliamsF1 BMW FW26 amounts to a bold initiative by the team. And in the same way that the FW25 underpinned the most successful season the BMW WilliamsF1 Team has enjoyed, so to the FW26 will prove to be the foundation of the team's fortunes in 2004. Fisher, its principle architect, confirms the team's philosophy:

"There is a great deal of anticipation on our part about this new car. It is has challenged us throughout its development, and there is certainly a sense that the day that it runs for the first time will be more significant than launch days in previous years. All of the team members will be proud that they have made enormous efforts to push the performance of this car as far forward as possible, and that in doing so will have written the opening chapter in what will become a successful season."

Jaguar powers back to series with Rocketsports Racing