In 2004 fully automatic gearboxes and launch control are banned and some drivers think it will make races more interesting. Without launch control, it will be up to those behind the wheel to make sure the car gets off the line. "The starts will be ...

In 2004 fully automatic gearboxes and launch control are banned and some drivers think it will make races more interesting. Without launch control, it will be up to those behind the wheel to make sure the car gets off the line. "The starts will be pretty interesting because you've really got to control the clutch," said Williams' Juan Pablo Montoya. 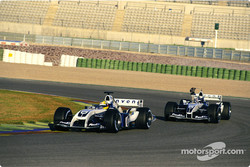 Ralf Schumacher and Juan Pablo Montoya.
Photo by Sutton Motorsport Images.
Teammate Ralf Schumacher thinks it will make for more on-track action: "Well certainly it's one more mistake a driver can do," he said. "At the start it used to be quite easy to blame a bad start on the team, now it's back in my control. What's good is that we'll have less consistent starts, so more mistakes and more overtaking."

Lack of launch control is not good news for some; Renault had the system working well last year and had some brilliant starts but that advantage has gone now. "Launch control has been banned so we will just have to start manually, which is a good challenge," said Jarno Trulli at the launch of the R24. "We are working on it, trying to develop a system, but it will be a lot down to the driver."

Traction control remains though, which can help: "It's up to us (drivers) now to prove ourselves and do good manual starts," commented Fernando Alonso. "It'll be ok, we'll have the traction control on so it's not that difficult."

The drivers face more work with no automatic gearbox. Williams will now operate gearshifts by a paddle behind the steering wheel. "For the first five laps shifting was pretty hard because you're so used to not shifting," said Montoya. "After ten, fifteen laps you get used to it though. It will certainly be interesting next year, that's for sure."

Mission Foods to be Montoya’s primary sponsor for Indy 500